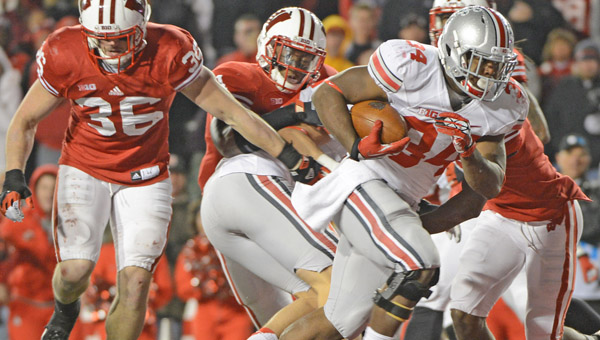 COLUMBUS (AP) — No. 4 Ohio State hasn’t picked on anyone its size yet this season.

On Saturday night, that all changes when the Buckeyes host No. 23 Wisconsin.

In its four non-conference games, Ohio State never trailed, led 102-14 through the first quarter and was ahead by at least eight points for 92 percent of the time.

How will they react if they get caught up in a dogfight?

The Wisconsin-Ohio State series has a history of close games. No fewer than 15 of the last 28 meetings have been decided by seven or fewer points.

“It’s a rivalry. These past couple of games have been real close,” Ohio State cornerback Bradley Roby said. “Two years ago it was a last-(minute) play to win the game, and then last year it was overtime. Anytime you have close games like that in the series, that kind of adds to the rivalry.”

To a man, the Buckeyes don’t express any doubts about what they took out of their pre-conference games, which they won by an average score of 53-15. In addition to never being behind, they were tied for less than 5 percent of the time.

Still, Buffalo, San Diego State, California and Florida A&M are a combined 3-10, with all three of the wins coming against FCS teams.

“Jack (Mewhort) told me yesterday, he said, ‘I’m ready to play somebody this week,”’ center Corey Linsley said of his linemate. “We played Cal, and these opponents have been playing hard, but it’s not like a Big Ten game. It’ll never be. It could never be.”

A year ago the Buckeyes ran the table, going 12-0 in Meyer’s first season including a spotless 8-0 in conference play.

Among the closest calls was a 21-14 overtime win at Wisconsin in which the Badgers forced overtime on a touchdown pass and conversion kick with 8 seconds left. The Buckeyes won it in overtime on Carlos Hyde’s 2-yard run and when Christian Bryant batted down Curt Phillips’ fourth-down pass.

The challenge this week for Ohio State’s coaching staff has been to remind the players of just how tight and hard-fought that game was — and what might be coming up on Saturday.

“Our program is not built to perform when you’re up by 20,” receivers coach Zach Smith said. “Our whole program is built around that competitive moment where you’ve got to either win the game or you lose the game. That’s what we’ve worked on for 12 months.”

The message must be hitting home to the players.

“Every Big Ten game is going to be a battle,” wide receiver Evan Spencer said. “We’re going out there to war every week, every time we’re going to play a Big Ten game. Having Wisconsin this early in the season, it’s going to be good for us, I think.”

Wisconsin is also aware of the importance of making big plays when most needed.

“When it comes to the waning moments of the game, we’ve got to bow up and get a stop for our team,” safety Dezmen Southward said.

The Badgers won their first two games by a combined 93-0, but then were caught up in a thriller at Arizona State that they lost on some questionable officiating in the final seconds.

Meyer will be watching Ohio State’s practice closely to make sure his players are tuned into the challenge at hand. He said workouts are competitive, and that stretches over to the games.

Reds host Pirates in ‘must win’ series for both teams