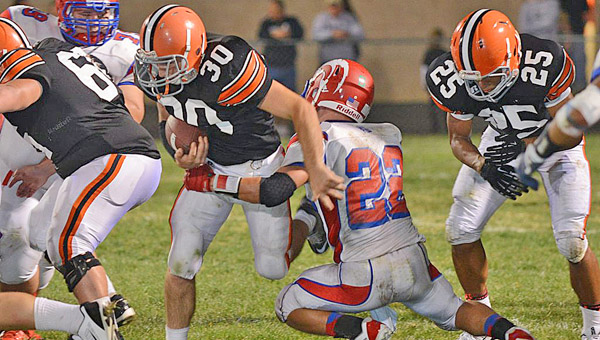 Ironton Fighting Tigers’ fullback Trevor Easterling (30) gets a block from Brock Midkiff-Sands (66) as he tries to run through the tackle of Portsmouth’s Johnnie Charles during Friday’s game. Ironton lost to the Trojans 33-20 in the annual homecoming game. (Tony Shotsky of Southern Ohio Sports Photos)

Ironton resembles a M*A*S*H* unit more than a football team and the injuries continued to pile up Friday in a 33-20 loss to the Portsmouth Trojans.

“You lost your two good T (formation) backs early — Desmond (Young) and (Derik) Berry — so your two power backs are out of the game and you have to make some adjustments. The kids hung in there, but it hurts obviously the execution because you’ve got guys in there who normally aren’t going to be playing.”

Ironton (2-3) moved the ball early on the ground but lost both Young and Berry in the first quarter to injuries. Young missed last week and his status was questionable for Friday’s game.

With second and third team backs in the game, Ironton switch to its spread offense and quarterback Tristan Cox took charge. Cox was 14 of 25 passing for 148 yards and a touchdown and also ran 22 times for 113 yards and two scores.

Portsmouth (2-3) got a big game from Johnnie Charles who ran 18 times for 169 yards and two touchdowns and also had an interception.

Sky Oliver took over at quarterback and was 11 of 17 for 185 yards and two touchdowns.

“Portsmouth is not a bad ball club but we knew that coming in. They did a nice job. They had three losses against three undefeated teams,” said Vass.

The Trojans fumbled the kickoff and Ironton recovered at the 26. But with a first down at the 13, two false start penalties put the Fighting Tigers in a hole and the drive stalled.

After forcing a three-and-out, Ironton drove to the Trojans’ 24. But Berry went out with an injured shoulder on the first play of the drive and Young went down seven plays later.

The drive ended as Ironton failed to convert on a fourth-and-3 at the 17.

Following another Portsmouth punt, Ironton was backed up at its own 31. Two more penalties moved the ball to the 21 and Nick Green picked off a pass and ran it back 13 yards for a touchdown. He kicked the extra point for 7-0 lead with 10:01 left in the half.

But a 38-yard pass from Oliver to Alex Dickerson on the first play following the kickoff got the ball to the Ironton 36. Three plays later, Oliver and Dickerson hooked up on an 11-yard scoring pass and it was 14-7 with 2:42 left in the half.

“The first half I thought it was just bad football. There’s no other way to put it. It was just not executing. It was pretty sloppy. We played better the second half but big plays hurt us. We still had our chances but we had some turnovers late that kind of ended it for us.”

Ironton tried to play beat the clock and drove from its own 32 to the Trojans’ 25 before the drive stalled. Portsmouth ran one play to end the half leading 14-7.

Tanner Price recovered a lateral at the Trojans’ 28 and Ironton scored three plays later as Cox hit Bowling with a 25-yard scoring pass. The conversion kick failed and Ironton trailed 14-13.

Charles returned the kickoff 67 yards to the Ironton 14 and Oliver hit Khalil Lattimore with a touchdown pass on the next play and it was 20-13.

After an Ironton punt, Portsmouth went 60 yards in 14 plays to take a 26-13 lead. Charles ran the final 6 yards for the score with 22 seconds left in the quarter.

Ironton quickly moved to the Portsmouth 25, but Charles made an athletic play with a leaping interception to halt the drive.

The Fighting Tigers held the Trojans on downs and then went 64 yards in nine plays to get within 26-20 with 5:40 left. Cox scored on a 12-yard run and Hunter Klaiber kicked the conversion.

Portsmouth used a 29-yard pass to Isiaha Lisath to get to the 1-yard line, but Oliver fumbled the snap as he went under center and Ironton recovered.

However, Dickerson came up with an interception at the 25 with 2:17 left and Charles bolted into the end zone on the next play to seal the Trojans’ win.

Jim Walker jim.walker@irontontribune.com   WAVERLY — Sid Tucker made the most of his first start in the Coal Grove backfield.... read more