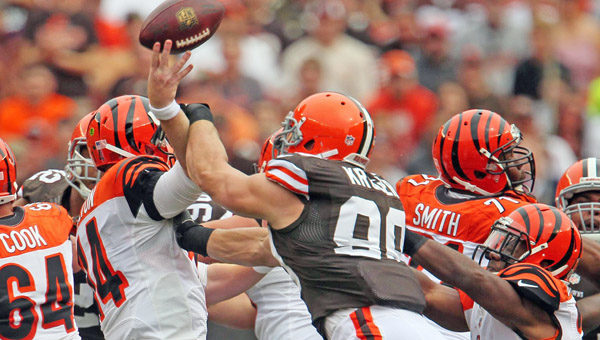 CLEVELAND (AP) — Brian Hoyer threw the game-clinching touchdown pass, turned and sprinted up the field as more than 70,000 fans roared.

It was the same way he used to do it in his backyard as a boy, pretending to lead his beloved Browns to victory.

On Sunday, he became a hometown hero for real.

Hoyer, the local kid who grew up dreaming of one day being Cleveland’s quarterback, threw two touchdown passes in his first start at home to lead the revived Browns to a 17-6 win over the Cincinnati Bengals on Sunday.

Hoyer tossed a 1-yard TD pass to Chris Ogbonnaya with 4:54 left to give the Browns (2-2) an 11-point lead before Cleveland turned it over to its vastly improved defense to put the Bengals (2-2) away.

Before the ball even dropped into Ogbonnaya’s hands, Hoyer took off running toward Cleveland’s helmet logo at the 50-yard-line with his index finger extended in the air.

Once he neared mid-field, Hoyer stopped and pumped his fist in celebration as he did years ago after throwing a TD while playing with his brother and friends behind his family’s home in North Olmsted, Ohio.

“It’s awesome,” Hoyer. “It’s cool to play in front of the hometown crowd in this stadium, where I grew up 15 minutes away from and obviously it’s a good day because the Tribe is winning, too.”

Not long after the Browns knocked off one of their division rivals, the Indians clinched a playoff spot for the first time since 2007.

In his second start in place of injured Brandon Weeden, Hoyer finished 25 of 38 for 269 yards and no interceptions. He threw a 2-yard TD pass in the first half to tight end Jordan Cameron, who had 10 catches for 91 yards.

But for the second week in a row, he came through in the clutch. Last week, Hoyer threw a 7-yard TD pass to Cameron with 51 seconds left as the Browns rallied to stun the Minnesota Vikings.

“Certainly he’s been the spark that I had hoped for and has led us to two games — winning two games,” said first-year coach Rob Chudzinski, who also spent his childhood pulling for the Browns.

The Bengals (2-2) couldn’t get anything going on offense and quarterback Andy Dalton was intercepted by Buster Skrine with 3:43 left, ending any chance of a Cincinnati comeback.

“I didn’t play well enough. I expect better out of the offense. To not score a touchdown, we’ve got too good of players and too good of a team not to do that. We have all the ability in the world on this team and we didn’t get it done.”

Hoyer began the season as Cleveland’s No. 3 quarterback. But after Weeden sprained his right thumb, Chudzinski tabbed Hoyer as his starter.

Last week, Hoyer threw three touchdowns and three picks in the win at Minnesota. And although Weeden began throwing this week, he’s not well enough to play. Now, he could be relegated to watching Hoyer for the rest of the season.

Chudzinski would not commit to Hoyer starting on Thursday against Buffalo, but it would be stunning for there to be any other choice.

“I’m still going to go through the same process,” Chudzinski said. “We’re going to go in and evaluate the tape. I thought he (Hoyer) did a great job, particularly managing some of the things early. I think guys settled in, he settled in, made some great decisions and throws and made big plays.”

Clinging to a 10-6 lead, Hoyer drove the Browns 91 yards in 12 plays for the clinching score.

Hoyer showed gorgeous touch on a 31-yard pass to Cameron to put the Browns at the Cincinnati 24. Willis McGahee, who promised a “dramatic” improvement in Cleveland’s running game this week, carried three times to the 1 and Hoyer took it from there, throwing his TD to Ogbonnaya.

Even before Ogbonnaya crossed the goal line, Hoyer was overcome with emotion.

“I was just telling Obie, ‘by the time you caught it, I was at the 40’,” Hoyer said, smiling. “It’s just good because you know you’re capping off that long drive with a touchdown and that’s what you need to win games.”

The Bengals were out of rhythm from the start on both sides of the ball.

Cincinnati was missing two starters in its secondary — cornerback Leon Hall and safety Reggie Nelson — because of injury and the Bengals’ offense sputtered for all 60 minutes.

Mike Nugent’s two field goals were all the Bengals could muster against Cleveland’s swarming defense. Green had seven catches for 51 mostly meaningless yards as Haden blanketed him all afternoon.

It was a discouraging loss for the Bengals, who overcame four turnovers last week to beat Green Bay and wasted a chance to take early control in the AFC North.

“It wasn’t lack of effort,” Bengals coach Marvin Lewis said. “Today we didn’t play well enough to win. It’s part of what we’ve got to do. We’ve got to keep growing and win.”

NOTES: Hoyer is the first Browns quarterback to win his first two starts since Mark Rypien in 1994. … Pro Bowl LT Joe Thomas made his 100th straight start, extending his consecutive snaps streak to 6,125, the NFL’s longest active streak. Thomas has not missed an offensive play since he was drafted third overall in 2007. … Browns K Billy Cundiff made a 51-yarder after missing from 37 and 49. He missed most of the week with a quadriceps injury. … Cameron’s 30 receptions through four games are the most for a tight end in Browns history. … Browns rookie LB Barkevious Mingo started in place of injured Jabaal Sheard and recorded his third sack in three games.

Jim Walker jim.walker@irontontribune.com   PEDRO — A key win in the Ohio Valley Conference is at stake when the Coal... read more