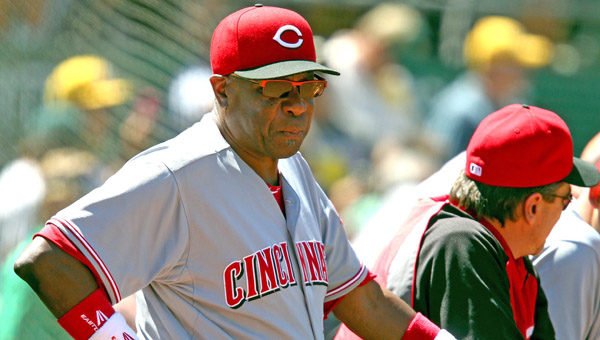 Cincinnati Reds’ manager Dusty Baker said everything that has happened during the regular season has little to do with the postseason, including Tuesday night’s Wild Card game that has his Reds visiting the Pittsburgh Pirates.

“(The regular season) doesn’t mean anything now because that’s what new means. New means you get rid of the old. It’s behind us now,” said Baker.

The Reds finished third in the Central Division, seven games behind division champion St. Louis and four games behind the runner-up Pirates.

Cincinnati enters the postseason on a five-game losing streak including three straight setbacks at home to these same Pirates. Baker too umbrage with the idea the Reds are “limping” into the playoffs.

“The momentum is in the hand of the pitcher. If the guy’s pitching well, then momentum means nothing. We’ve got our ace, we’ve got Johnny Cueto on the mound, so we plan on winning just like they plan on winning.

Cueto (5-2, 2.82 ERA) has been on the disabled list three times this season but pitched well last Monday against the New York Mets in his return.

Cueto has had good success against the Pirates. He is 13-4 with a 2.37 earned run average in 21 career starts against Pittsburgh including an 8-2 record and 1.90 ERA at PNC Park.

Pittsburgh will counter with Francisco Liriano who is 16-8 with a 3.02 ERA.

Baker picked Cueto to start after it was revealed the first choice Mat Latos had a bone chip that was causing him some pain in his elbow.

“If (Latos) goes out there and throws an inning or so, maybe I carry an extra guy just in case. It’s not a tough decision. If a guy comes up hurt, they’re going to blame me anyway. There’s no sense in taking a chance,” said Baker.

“When I was playing, J.R. Richard said something was wrong. He complained about shoulder pain. They didn’t believe him because he was throwing the heck out of the ball. Then J.R. Richard ended up having a stroke and never throwing again in the major leagues. When a guy says something is wrong with him, that’s not a very tough decision. You have to take him for his word.”

Reds’ All-Star second baseman Brandon Phillips will play. Phillips was hurt Saturday when he fouled a pitch off his leg causing immediate swelling. He sat out Sunday’s season finale.

“I saw him yesterday and he wasn’t limping, he was pimping,” Baker said with a laugh.

The one-game playoff game will be the 20th meeting this season between the two teams including six times over the final nine games of the season. The Pirates used the three-game season-ending sweep to win the season series 11-8.

“We know them and they know us. You get by this series, you get even more familiarity with the next team you’re playing. I kind of like being familiar with the opposition. At least you have an idea what they’re going to do to you and an idea what you have to do to them,” said Baker.