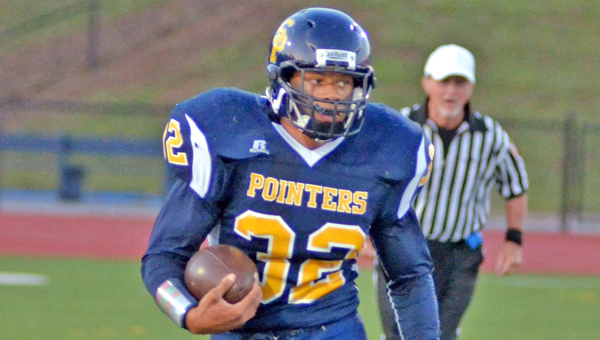 South Point Pointers’ junior running back Mason White leads the team in scoring and is one of the top receivers out of the backfield. The Pointers host Fairland Friday in a pivotal Ohio Valley Conference game. (Kent Sanborn Of Southern Ohio Sports Photos.com)

Two teams with similar offensive philosophies will attempt to see which one can outscore the other as they battle for a key win in the Ohio Valley Conference race.

Fairland is led by quarterback Chance Short who has thrown for more than 1,000 yards midway through the season. South Point quarterback Gage Townson has been his team’s biggest offensive weapon who relies on running back Mason White.

“We’re a bigger teams and we need to be more physical. Our offensive line has been proving itself the past two weeks,” said Fairland coach Cullen Homolka.

“South Point has some good athletes. (White) is a good player and they’ve got some other good players. They have the ability to hit the quick score. (Isaih Jones) can step on the gas and they hit him deep.”

Fairland will look to slow down the Pointers’ offense with a defense led by tackles Dionte and De”vonte Braye.

“We have two defensive tackles who are pretty aggressive,” said Homolka.

Not only is the game big in the league, but the winner will enhance their playoff chances while the loser will probably fall out of contention.

Both teams are coming off a loss to unbeaten powers. South Point fell to Lucasville Valley and the Dragons were outscored 55-46 by Athens.

Homolka said the key for his team will be its preparation.

This game has been a rivalry throughout the years and both teams have similar styles that should make for a physical contest.

Coal Grove runs its power game with an I-formation and a wingback. The Hornets like to control the clock with long, time-consuming drives.

Rock Hill has returned to its running game and has had success moving the ball. The problem for the Redmen has been turnovers and critical mistakes.

Although both teams like to run the ball, the difference could be Coal Grove’s ability to throw the ball. Hornets’ quarterback Jesse Rigsby has a gifted and sure-handed receiver in Conor Markins and two other receivers in Joe Akers and Sean Paulus who can make clutch catches.

River Valley picked up its first win of the season last week with a 40-29 victory over Alexander (1-4).

Raiders’ quarterback Dayton Hardway was the key to the offense. Hardway completed 24 of 38 passes for 364 yards and five touchdowns. He was intercepted once.

The key for the Panthers will be getting pressure on Hardway. Alexander was able to sack Hardway six times for a minus 78 yards.

Green is averaging nearly 26 points a game and that includes a shutout loss to Dayton Jefferson.

The key to the game for the Vikings will be the ability of the defense to slow down Green’s offense and for their own offense to avoid costly turnovers that have plagued them and stopped potential scoring drives.

Johnson Central comes into the game ranked third in the Kentucky Class 4-A poll.

The Eagles are unbeaten against a less than challenging schedule with the exception of a solid Harlan County team. However, Johnson Central jumped out to a 36-0 halftime lead against Harlan Conty thanks to four critical turnovers. The Eagles failed to score in the second half.

Ironton could offer a challenge to the Eagles. The Fighting Tigers have been riddled by injuries that have depleted an already thin depth chart.

COLUMBUS (AP) — There are many college football players who don’t like Saturday night games. Cameron Johnston is not one... read more