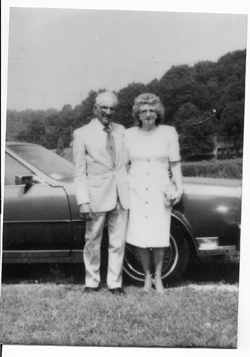 Mr. and Mrs. Albert Bonzo, of Ironton, celebrated their 65th wedding anniversary on Tuesday, Aug. 27, 2013. They were married on that date in 1948 at Long Run Freewill Baptist Church by Mrs. Bonzo’s late uncle, the Rev. Melford Riddlebarger.

Mr. Bonzo is the second son of the late Mr. and Mrs. James H. Bonzo, of Haverhill, who retired in Minford. He is a graduate of Green Township High School in the class of 1940.

During World War II, Mr. Bonzo served in the medical unit of the Army. Since then, Mr. Bonzo has been a farmer, still living on the farm they purchased in 1948.

Mrs. Bonzo is the eldest daughter of the late Mr. and Mrs. Clarence Riddlebarger of Long Run. She is a graduate of the class of 1942 at Valley High School.

During WWII, Mrs. Bonzo worked in the defense plant in Springfield as a table inspector of airplane parts. Since then she had done clerical work and been a housewife.

They have seven grandchildren, Melissa, Jessica, Sarah, Rebecca, Kayle, Keith and John; five great-grandchildren; one step granddaughter, Kendra; and one grandson, Joshua, who is deceased.

Larry and Wendy Blevins announce the birth of their daughter, Adalyn Elizabeth Paige. She was born at 10:53 a.m. Friday,... read more