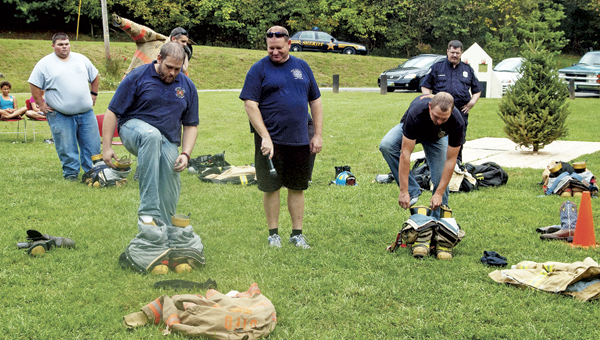 The theme of the day was saving lives, but for a short time, it was about winning.

Part of the Public Fire Safety Day in Coal Grove is a firefighters’ challenge where firefighters go head-to-head in a timed challenge to see who can get their turnout gear on the fastest.

Coal Grove Chief Gary Sherman said prior to the event he was anxious to see if any other department could take the title.

Haukedahl is now a two-time champion so Sherman will have to wait another year.

Sherman says the event being free is important and since it is open to the general public, donations — either monetary contributions or door prizes — are vital to the event.

“Each year we go out and seek donations and our sponsors are awesome people,” Sherman said. “We never ask for a penny in return. We give away everything our sponsors give us.”

The Lawrence County Sheriff’s Office, Ohio State Police, regular EMS and tactical EMS, Air Evac, community action and many other agencies were at the event handing out literature.

The familiar Conestoga wagon jutted out in to the street. Music was being played and the aroma of food was... read more