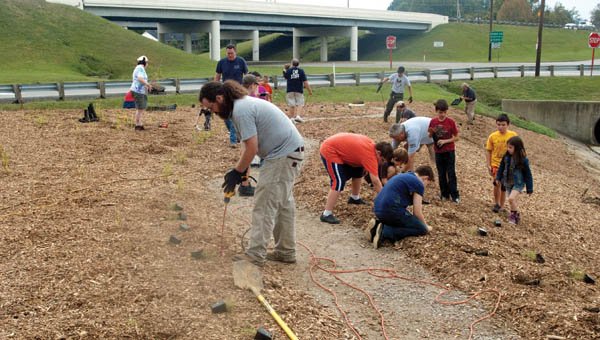 It’s simple really: Create three thriving ecosystems in a field that was once just grass.

OK, maybe it’s not so simple.

Regardless of the difficulty, it’s what is happening at the field next to St. Mary’s Medical Center-Ironton Campus where several organizations have joined forces to create a native garden.

The garden is a partnership with the Ironton-Lawrence County Community Action Organization, Ironton in Bloom and St. Mary’s Medical Center-Ironton Campus.

“St. Mary’s is providing the place for us,” Carol Allen, president of IIB, said.

A portion of the garden is done in prairie grass and flowers while the side closest to the pond is planted in ornamental native plants.

“We ordered 25 name plates to place next to the plants of particular species,” Allen said. “In order to get the right grass, you have to know its Latin name. Native plants are grasses. There are a variety of grasses. Some are invasive and some are truly native. That is why it is important if they want to plant some of this grass and not have to mow a portion of the lawn, they need a name.”

The garden has started out looking relatively bare with one plant per every 12 square inches.

“They re-seed themselves,” Allen said. “Each year there will be more and more. Finally the native plants will take over. To begin with we will have to pull weeds so weeds don’t take over.”

But when the native garden is in full bloom, it will be relatively maintenance-free as far as weeding and watering. This is not the case with the typical kind of plants put out in local gardens that are imported from overseas.

“People spend all kinds of money planting flowers and watering them,” Allen said. “If people would plant native plants, they re-seed themselves. They don’t need to be watered once established. They have grown accustomed to living in our environment. “(The non-native garden) takes a lot of time and a lot of water, which we need to be preserving when people’s budgets are so tight. But they still want beauty. Why not use something that is native and beautiful.”

All the plants in the garden are from Dr. Frank Porter’s nursery in Pomeroy. Porter is a retired professor who now spends his time growing – and writing books about – plants.

“One thing this garden will do is show the public how ornamental native plants can be,” Porter said. “It will show how beneficial these plants can be, too.”

Porter said many of the plants in the garden are like magnets for butterflies, moths, birds and insects and, “all are necessary for an ecosystem to thrive and grow.”

“I have had people tell me they haven’t seen a monarch butterfly in years,” Porter said. “That’s probably true, because there aren’t many left.”

Aside from the aesthetic, scientific and environmental benefits of the garden there are also some local youths who will benefit from its planting. Cub Scout Pack 106, of Ironton, had several of its members digging in the dirt early on a Saturday morning.

“They are here volunteering to earn their conservation badge,” Larry Anderson, cub master, said. “They are all working really hard.”

Porter said a section is to be a combination of tall grass prairie, with blue stem and Indian grass.

“We want to intersperse prairie wildflowers among the grass,” Porter said. “Just like the ones that would naturally be there.”

Also in the garden is silver plume grass, which is rare and used to be in Ohio, Porter said.

“These are the grasses that should be used,” Porter said. “We are taking one large natural area and condensing it down to fit right here.”

Porter said when the plants and flowers start to bloom next spring the purpose of the ecosystems will start being realized.

Motorists traveling parts of U.S. 52 in Lawrence and Scioto counties are noticing a change in the speed limits. They... read more