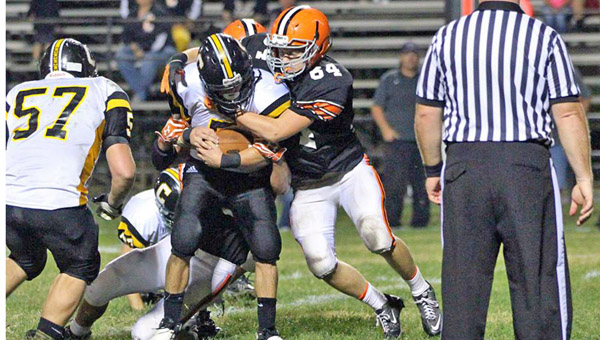 It’s what’s up front that counts.

The Johnson Central Eagles took advantage of their depth and experience on the offensive and defensive lines to control the line of scrimmage and beat the Ironton Fighting Tigers 56-14 Friday.

“They’re a good team. They might be the best team we’ve played. They were just better than us up front on both sides of the ball,” said Ironton coach Mark Vass.

“When you can’t block a team, it limits what you can do offensively, and if you can’t stop them up front they can pretty much do whatever they want.”

The game was scoreless until the second quarter when Zach Gound scored on a 7-yard keeper on the first play of the period.

A blocked punt gave the Eagles the ball at the Ironton 12. After a holding penalty, Gound hit Dalton Adkins two plays later with an 18-yard touchdown pass and it was 14-0 with 8:45 left in the half.

A 41-yard punt return by Jordan Young got the ball to the Ironton 19 and the Eagles scored two plays later on a 17-yard scamper by Daymion Belcher.

Johnson Central got the ball back at the Ironton 49 after a short punt and it again took just two plays for the Eagles to score. Bryce Workman hit Adkins with a 37-yard scoring pass and it was 28-0 with 2:35 in the half.

But Ironton went to work and went 74 yards in nine plays to score. Tristan Cox hit Joe Bowling on a 32-yard pass with no time on the clock and it was 28-7 at the half.

Cox finished the game 7 of 16 passing for 114 yards. Bowling had two catches for 51 yards.

Ironton came out the second half and scored on the second play as D’Angelo Palladio went 79 yards through the teeth of the Eagles’ defense for a touchdown. Hunter Klaiber’s kick cut the deficit to 28-14 with 11:07 on the clock.

Palladino — ineligible the first five games after moving to Ironton late — was impressive in his debut. He ran 21 times for 138 yards and caught two passes for 40 yards.

“I’m proud of our kids. We got down 28-0 and came back and got within 28-14. I can’t fault their effort. We made some good plays and we had a few mistakes that cost us and you can’t afford to do that against a team as good as Johnson Central,” said Vass.

“Palladino is a talented kid. He can run, but he’s a tough kid, too. He runs hard and he’s not afraid to stick his nose in there on either side of the ball.”

Johnson Central answered two plays later on a 49-yard run by Belcher and it was 35-14.

A 40-yard gallop by Young set up a 12-yard run by Josh Gound for the next Eagles’ score.

Ironton failed to convert on fourth down and the Eagles took over at the Ironton 30. A 20-yard pass to Young got the ball to the 10 and Belcher scored on the next play for a 42-14 lead.

Jim Walker jim.walker@irontontribune.com   PEDRO — In a battle of power versus power, the Coal Grove Hornets flexed a little... read more