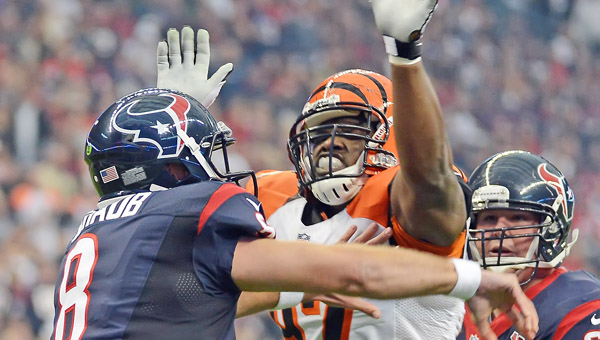 The Bengals are developing a reputation for stopping the league’s top passers in their tracks. They’ve beaten Roethlisberger’s Steelers, Rodgers’ Packers and Brady’s Patriots in their three home games this season.

The defense is the main reason Cincinnati (3-2) is tied for the AFC North lead. The offense has scored only one touchdown in the last two games, but the defense is doing the rest.

The latest notable accomplishment was stopping Brady’s streak of 52 straight games with a touchdown pass on Sunday during a 13-6 win over the Patriots. Brady had one of his worst games, and the Patriots were held without a touchdown for the first time in more than four years.

“Without a doubt, guys like that — when you play great quarterbacks, you’ve got to play great,” defensive end Wallace Gilberry said.

Even with top cornerback Leon Hall out because of a hamstring injury, they were great all the way to the stormy end. Kevin Huber’s 57-yard punt into a heavy rain backed up New England for its final possession.

Then the heavy rain turned heavier, making it difficult for players to see. They had to keep blinking against the pelting raindrops, which was a huge help to the defense. The Patriots dropped several passes on their final possession, and Brady’s desperation pass was intercepted by Adam “Pacman” Jones inside the 5-yard line in the closing seconds.

After watching video of the final minutes on Monday, Huber noted that the weather played to Cincinnati’s favor once he got off his long punt.

“And then the skies open and they couldn’t complete a pass, so that was nice,” Huber said.

The Bengals knew the defense would have to play exceptionally well in order for them to get through their opening stretch of games with a winning record.

“When the schedule came out, I think I counted that we played 10 of the last 12 Super Bowl participants,” coach Marvin Lewis said Monday. “Obviously with that comes very good quarterbacks and generally experienced football teams. They’ve been used to being successful.

“It’s great for the football team. It’s a great experience we’ve had for the home fans to see these three quarterbacks in action three weeks in a row, guys that have been MVP of the Super Bowl.”

The theme has been the same in all three games: Use their deep defensive line to get pressure up the middle, forcing the quarterback to throw quickly or run around trying to avoid a sack. Either way, the offense gets knocked out of sync.

Geno Atkins sacked Brady on his first passing attempt, setting the tone for the day.

“On the second play, we got a sack right away on Tom,” tackle Domata Peko said. “And for the majority of the game, he was on his back. Every play, he needed help coming up off the ground. When you do that to any quarterback — when you get in their face — they’re going to make mistakes.”

The Bengals play on Sunday at Buffalo (2-3), which plans to start Thad Lewis in place of the injured injured EJ Manuel. Cincinnati should have everything in its favor against an inexperienced passer.

“You just have to be good at what you do,” Lewis said. “They’re going to generally look to play to their strength. We’ve got to get them off schedule.”

NOTES: Lewis said Hall could return this week after missing two games. The defensive secondary has been thinned by injuries. “Leon was very close to being able to play last week, so barring any kinds of setbacks, we should have an opportunity to get a couple of guys back and be ready to go,” Lewis said.

CINCINNATI (AP) — Cincinnati Bengals cornerback Adam “Pacman” Jones punched a woman after she poured beer on him when he... read more