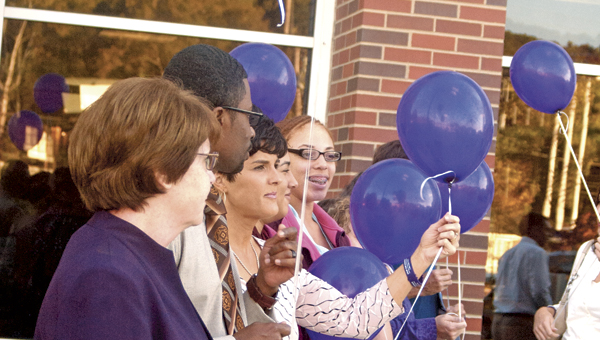 One in four women experiences domestic violence in her lifetime. Every nine seconds a woman is assaulted or beaten. More than three women every day are murdered by their husbands or boyfriends.

Eradicating those statistics is the mission of the Lawrence County Domestic Violence Task Force, especially during October, which is Domestic Violence Awareness Month. For the fifth year the task force marked the month with a special program.

“We are here to commemorate those who have lost their lives to domestic violence and to celebrate those who have been able to move on,” Elaine Payne, director of the Lawrence County Domestic Violence Shelter, told an audience at the Bowman Auditorium on the campus of Ohio University Southern on Monday.

“Domestic violence is a community thing,” she said. “We must work together.”

As is the tradition, the event began with the release of purple balloons in the courtyard of OUS.

Keynote speaker for the evening was Kelli Grace, outreach coordinator of the crime victim services for the Ohio Attorney General.

Grace attributed what she calls “her passion” for advocacy to her mother.

“She taught me to be an activist,” Grace said. “She always said ‘You do the right thing for the right reason. No matter what comes from that.’”

A home should be a place of refuge where one feels safe for all members of a family, Grace told the audience.

“Domestic violence is family violence,” she said. “You cannot hit a mother without affecting the children. It is domestic terrorism. If you can’t walk home knowing that is the place where you can lay down your head, where your children can be safe, if you don’t have that, what do you have?”

She encouraged the audience to reach out to help one person, to show an act of kindness.

“People deserve respect and kindness and acceptance,” she said. “Make a commitment you are going to be a human being.”

PROCTORVILLE — After receiving three As and one B on the state school district report card for 2012-2013, the Fairland... read more