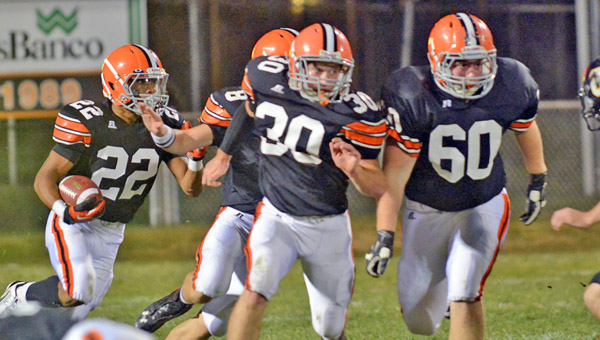 Ironton Fighting Tigers’ running back D’Angelo Palladino (22) follows the blocking of Trevor Easterling (30), Justin Robinson (60) and Tristan Cox (8) on a sweep as he gains some of his 138 yards in last week’s game against Johnson Central. Ironton plays at Columbus St. Charles Friday. (Tony Shotsky of Southern Ohio Sports Photos)

It almost looks like it will be a game of “Pig,” football style.

In a basketball game of “Pig,” shooters have to match the shot made by the first shooter. That’s they way it appears to be when the Ironton Fighting Tigers play at the St. Charles Cardinals Friday.

“St. Charles is a very athletic group of players,” Ironton coach Mark Vass said of the Division II all-male school. “The focus is on the quarterback and Bell, but their other running backs are good layers and so are their receivers.”

Ironton counters with D’Angelo Palladino who had 138 yards on 21 carries in his debut last week.

“Bell is only about 160 pounds, but he’s strong and runs hard. You don’t arm tackle him,” said Vass.

The Cardinals have a run-pass threat in quarterback Jacob Moehrman (5-11, 240) who has 25 carries for 126 yards and is 14 of 28 passing for 198 yards and two touchdowns. He has thrown three interceptions.

“Their quarterback is a threat to run at any time, but if you focus on the run with he will throw it to the open receiver. He’s a nice player,” said Vass.

Ironton (2-4) has its own duel threat in Tristan Cox who leads the team in total offense with 430 yards rushing and 475 more passing. He also leads the team with eight touchdowns.

The Cardinals’ defense is an alignment familiar to Ironton: a 5-2.

“They’ve got a good defense. They run to the ball well. They have some good athletes so they can play against a power offense and then switch if a team goes to the spread,” said Vass.

Jim Walker jim.walker@irontontribune.com   ROME — The beat goes on for the Fairland Dragons, it just had to beat a... read more