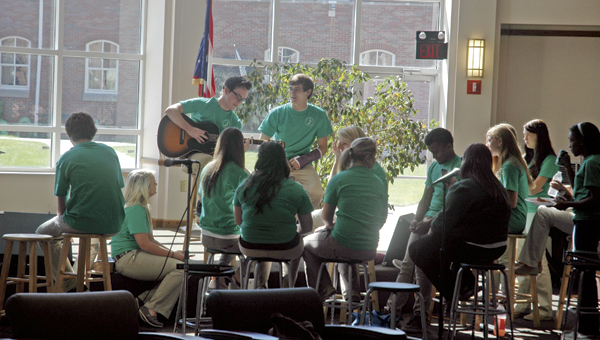 The next to last performance of the 2013 Brown Bag Concert Series at Ohio University Southern featured the Ironton High School Varsity Singers.

The group is well-known throughout the area and performs nearly 25 concerts per year.

“We regularly perform with the Huntington Symphony and at Trees and Trains in Ashland, just to name a few,” Kathy Price, music teacher and group director, said. “But we are regulars here at the Brown Bag.”

Price lost 13 members of the group to graduation and one member because of a transfer. She said the group being inexperienced has not been as tough a hurdle as she originally thought.

“They are young,” she said, “but they are really enthusiastic. They sound great together and they really do have a lot of fun.”

At noon on Wednesday in the Riffe Center Mains Rotunda at OUS the Brown Bag Concert Series will conclude with open mic performances.