Panthers will try to slow down Dragons 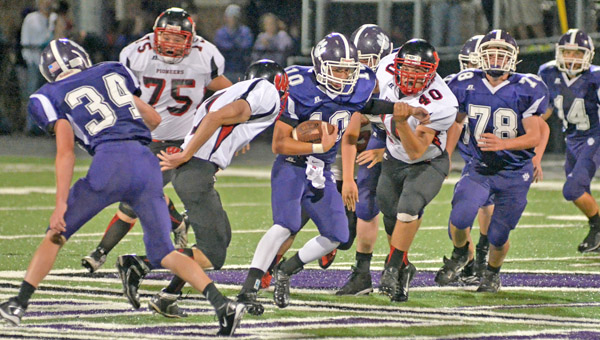 The Fairland Dragons’ offense operates at 85 miles an hour. The Chesapeake Panthers are hoping to make it a 20-mile an hour school zone.

Friday’s Ohio Valley Conference game will pit the fast-paced spread attack of the Dragons against the ball-control running style of the Panthers.

The problem with matching contrasting offenses is more about personnel than styles, and that concerns Chesapeake head coach Andy Clark.

“They’re fast. They have a lot of speed. They get you in space and make big plays,” said Clark.

Fairland is led by quarterback Chance Short who has an all-purpose running back in Evan Maddox at his main target. The senior running back can hurt defenses running and receiving.

The other key receivers in the 44 points per game offense are receivers Kyle Sowards and Nathan Campbell.

“Their quarterback is pretty solid and Maddox is a nice player, but they have a lot of nice skilled players,” said Clark.

The Panthers will try to control the ball with running backs Chad Meadows and Maccoy Brown behind a patchwork offensive line that has been racked by injuries.

“We have to run the ball and keep it out of their hands. But with all our injuries and new players we’re playing, that’s easier said than done,” said Clark. “Defensively, they’re aggressive and they come after you.”

Although the Dragons offense has scored 264 points in six games, the quick-score pace has put the defense on the field for much of the game.

Because of their time on the field, the defense has allowed 259 points or 43 per contest. However, the biggest point totals scored against the Dragons were by unbeaten teams Athens and Wheelersburg along with SEOAL favorite Gallipolis.

After the pre-conference schedule gauntlet the Hornets faced that left them 0-4, they have bounced back the past two weeks with wins over Waverly and OVC rival Rock Hill.

Coal Grove hasn’t had trouble scoring. Even in their losses, the Hornets have scored no less than 20 points in each game.

This game will feature a contrast in styles. Coal Grove runs its usual power game and features a stable of running backs. River Valley uses a spread offense led by quarterback Dayton Hardway.

However, the Hornets have proven they can throw the ball with quarterback Jesse Rigsby who has the talented hands of receiver Conor Markins as a key target. Key players to the round game are running backs Sid Tucker, Isaiah Gunther and D.J. Miller.

The South Point Pointers started the season 4-0 but have hit a wall the past two weeks against a pair of offensive powers.

Despite the losses, the Pointers have still been able to put points on the scoreboard. They lost 62-29 at unbeaten Lucasville Valley and were outscored 74-43 last week by Fairland.

Rock Hill has yet to win, but that has been misleading.

The Redmen were ready to score against Wellston two weeks ago only to run out of time inside the 5-yard line as the game ended. Last week, Rock Hill only trailed co-OVC favorite Coal Grove 21-13 after three quarters when a couple of lost fumbles deep in their own territory led to some quick touchdowns and a 41-13 loss.

Turnovers have been the biggest problem for the Redmen all season. They move the ball but suffer a critical mistake that leads in a swing of points from their side to the opposition.

This will be a key Southern Ohio Conference I game for the Vikings who can’t afford to stumble with Oak Hill and Portsmouth Notre Dame the next two weeks. Oak Hill plays at Notre Dame on Saturday in a game that is pivotal toward winning the SOC.

East has been hurt by injuries this season and they had some crucial mistakes in a 46-6 loss to Oak Hill last week. The Tartans gambled on fourth down at midfield on their first possession and failed to convert, thus leading to an Oaks’ touchdown.

East later failed to convert on a fake punt that led to an Oak Hill score. The Tartans also allowed the Oaks to return a punt for a touchdown.

The Cardinals are a Division II team while Ironton is Division V. While the Fighting Tigers are 2-4, their opponents have a combined 25-14. Counting future games, the overall opponents’ record is 43-20. Two teams — Johnson Central and Wheelersburg — are 6-0. Kentucky has six classes in football and Johnson Central is ranked third in Class 4A, the third largest classification.

Wheelersburg is ranked first in the AP Div. V poll and future opponent Raceland is ninth in Class A. Ashland has climbed to No.10 in Class 5A.