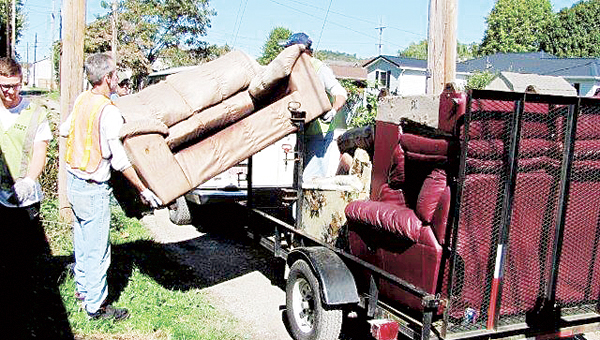 There’s no telling the last time hymns were played on the old electric organ — weatherworn and overgrown with weeds — sitting abandoned in an alley on the south end of Ironton.

The musical instrument, out of place in the elements, was one of the more unusual items picked up by crews Wednesday who were working to clean up the city.

Sponsored by the Lawrence-Scioto Solid Waste Management District and Ironton Municipal Judge O. Clark Collins’ community service program, the clean-up — in just one day — collected more waste than could fit in the rolloff containers set up at the South Ironton Industrial Park.

Dan Palmer, coordinator of the LSSWMD, said if it were not for the help of Dennis Salyers with Mi-De-Con, a business at the industrial park, there would have been no more room in the six rolloffs for the house-hold waste the crews were collecting.

“He was an immense help with this clean up,” Palmer said.

Palmer also praised the community service program for letting the workers help in the project, as well as Brent Looney from the juvenile center, who loaned a trailer to haul items.

“I can’t say enough for Judge (O. Clark) Collins and his crew, or we wouldn’t be able to do this,” Palmer said.

“If everyone would do their part in taking care of their property, we wouldn’t have this problem,” Palmer said.

Meanwhile, the Ironton City Health Department made about 22 house calls for residents who need help moving old items from their homes.

Thursday, crews, along with the health department, focused on the north end of town, which Palmer said was much cleaner to start than the south end.

Today, Palmer said workers would focus on the alleys in the downtown area, clearing the weeds and trash.

The rolloffs will be available through Saturday for the public to disposed of unwanted items.

Historian to speak about Civil War