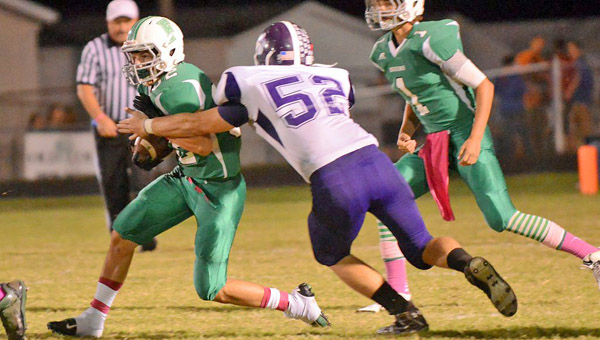 Fairland Dragons’ senior running back Evan Maddox (left) runs for some of his 149 yards as Chesapeake’s Austin Carpenter attempts to bring him down. The Dragons used a big second half to win 58-20. (Tony Shotsky of Southern Ohio Sports Photos)

PROCTORVILLE — The Fairland Dragons made a couple of changes in the second half. The Chesapeake Panthers made some turnovers.

Leading just 22-20 at the break, Fairland inserted 6-foot-3, 290-pound Matt McComas into its defensive front to help stop the run and — with a few adjustments — it worked as Fairland held Chesapeake scoreless in the second half en route to a 58-20 Ohio Valley Conference win Friday.

“I’m proud of our kids. They always play hard and they never quit tip my hat to Chesapeake, too. They were very physical. Everybody else has spread us out and thrown it. They ran at us and it took us two quarters to figure it out.”

Fairland is now 4-3 and 2-0 in the OVC. The Dragons visit Coal Grove next Friday in a showdown for first place in the league.

The underdog Panthers (1-6, 1-1) held their own in the first half, but were forced to throw in the second half and Fairland came up with three interceptions. Two of the interceptions went for touchdowns — one each by Derrik Willis and Kyle Sowards.

“We played well the first half and then we started turning the ball over in the second half,” said Panthers’ coach Andy Clark.

“But we never stopped them. They had too much speed and too much depth for us.”

Sowards has six receptions for 128 yards.

Chesapeake had 241 total yards but only 15 through the air. Maccoy Brown carried 13 times for 98 yards and Chad Meadows ran 19 times for 69 yards and two touchdowns.

Maddox ran 7 yards for a score to put the Dragons up 7-0, but Meadows’ 5-yard run tied the game in the first quarter.

Maddox scored from 4 yards out as the lead went to 14-7 only to have Meadows get his second 5-yard scoring run to tie the game again.

Fairland then took the lead for good on a 14-yard run by Nathan Campbell who also added the conversion run and it was 22-14.

Andrew Saunders caught the only pass on the night for the Panthers as he teamed up with Austin Oldaker on a 15-yard scoring pass. The conversion run failed and Fairland led 22-20 at the half.

Fairland asserted itself in the third quarter.

First, Maddox scored on a 3-yard run and Short ran for the conversion and it was 30-20.

Willis then picked off a pass and ran it back 28 yards for a touchdown and a 36-20 lead.

Sowards came up with his first interception of the game that set up an 8-yard scoring run by Campbell 21 seconds later. Campbell also ran for the conversion and it was 44-20.

Short hit Campbell with a 16-yard scoring pass in the fourth quarter and Campbell again ran for the conversion and a 52-20 lead.

Sowards capped the scoring with a 50-yard interception return for a touchdown.