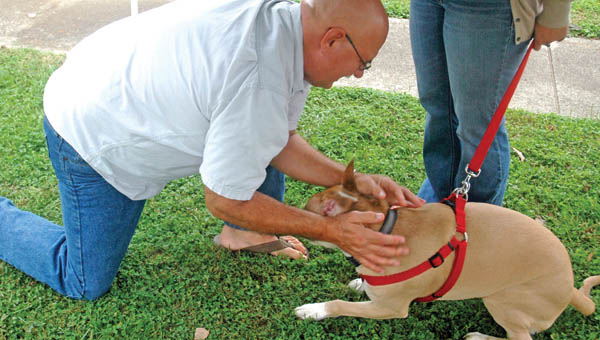 First Pugslee, an almost 2-year-old pug and Chihuahua mix, was front and center as Terry Jones, the new pastor at Resurrection Hope, sprinkled holy water on him.

“I’ve never done anything like this before,” Don Davidson of Ironton said. Davidson co-owns the dog with his son, Michael. “What harm is there in it?”

Next up was Brady, a 2-year-old pit bull, owned by Mindy Hunt of Ashland, Ky.

Despite being an amputee, the result of a car accident before Hunt became his owner, Brady proved to be a handful as his owner worked to rein him in.

“This is my baby,” Hunt said about her pet.

Cooper, a 2-year-old shepherd mix, came to the church via his owner, Ginny Daniel of South Point, who also works with Jones at an Ashland area hospital.

“I love Terry and I love my dog,” Daniel said. “This is my first pet blessing and I wanted Terry to do it. This shows their importance as much as humans.”

This was the second time for the church to have the pet blessing and the first for Jones to officiate.

Each animal was brought to the side yard of the church, where Jones dipped his hands into a glass bowl of holy water and then made the sign of the cross on the forehead of the animal.

Then each visitor was given a postcard with a special pet blessing on it for owners to say to their animals at home.