‘Jamboree on the Air’ event set for Saturday 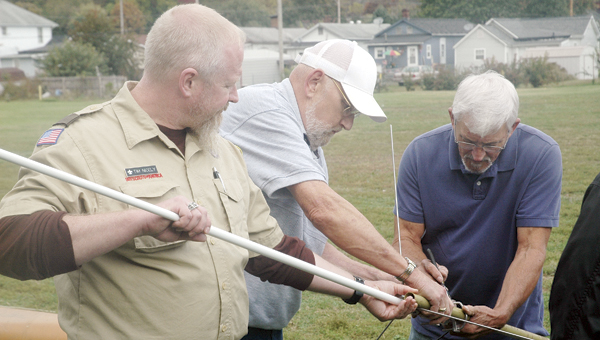 A 2-meter 440 UHF-VHF antenna is assembled behind Ironton’s Central Christian Church in preparation for this Saturday’s 56th Jamboree on the Air. The event pairs Boy Scouts with members of the Southern Ohio Amateur Radio Association (SOARA) to communicate with scouts around the world and encourage youth to be ham radio operators. Pictured, from left, Troop 106 Assistant Scout Master Tim Nicely and SOARA members James Rowe and Dave Spears.

The largest scouting event in the world will take place this Saturday.

The 56th Jamboree on the Air (JOTA) will begin at 1 p.m. Saturday at Central Christian Church in Ironton. Held annually during the third weekend in October, JOTA provides Boy Scouts of America members to experience amateur radio in an attempt to pique interest in “hamming.”

Several members of the Southern Ohio Amateur Radio Association (SOARA) on Monday were busy setting up equipment in preparation of JOTA.

“We are just doing a test run to make sure everything will work out,” Ken Massie, SOARA public information officer, said. “There will be a lot more people here on Saturday, that’s for sure.”

Nearly 750,000 Scouts from 6,000 stations in 150 countries participate in JOTA. The goal of the event is to foster Scout-to-Scout communication across borders. Last year more than 18,500 scouts from more than 200 stations in the United States took part in JOTA, a substantial increase in participation from 2011.

Massie has been a ham radio operator since a relative got him interested in it 48 years ago. He hopes this event creates a newfound interest for young people.

“I like to encourage youth to get involved,” he said. “Kids today are all texting. They don’t even talk on the phone anymore and many have no idea what a ham radio even is.”

Scouts from Troop 106 of Central Christian will join ham radio operators from SOARA during the event behind the church. Two high frequency (HF) stations and one VHF-UHF stations will be set up.

Massie’s own experiences as a ham radio operator has been fodder for fond memories he has from his days as a member of the Navy-Marine Corps Military Affiliated Radio Service (MARS).

“I passed messages for soldiers, ships at sea and missionaries in Central and South America,” he said. “There was a Navy base in Antarctica and the only way to communicate was through radio. I passed messages to the people on that base, too.”

The public is invited to the event.

The Cause to host luncheon, lectures

A luncheon to raise awareness for breast cancer will be held at noon Saturday at the First Baptist Church in... read more