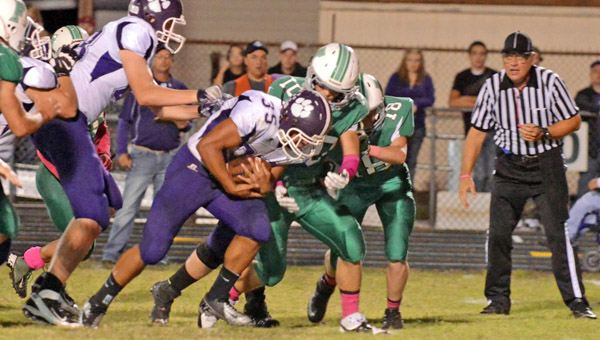 The schedule says Fairland at Coal Grove, but this is more than just a scheduled game.

The Fairland Dragons and Coal Grove Hornets will meet Friday in a game that has plenty of implications.

First and foremost, the game will put one team in the driver’s seat toward winning the Ohio Valley Conference. Second, the winner will get a lot of computer points toward qualifying for the postseason playoffs.

And then there is the extra incentive for the Dragons whose senior class has never beaten Coal Grove.

“There’s plenty to be playing for and our kids know that. They’ve had a good week of practice,” said Fairland coach Cullen Homolka.

The game will be a contrast in offensive styles. Fairland has a wide-open spread offense while Coal Grove prefers to run the ball with a power formation.

However, both teams possess some skilled athletes and are capable of scoring a lot of points. Fairland has scored 322 points or an average of 46 a game. However, Coal Grove has scored 257 points or 37 points a game.

Despite all the offensive talk, Hornets’ coach Dave Lucas sees a different side of the game.

“They’ve got good athletes. It’ll be an interesting game, but that’s what you expect when you have the two best teams in the league,” said Lucas. “Both teams are dangerous on offense, but the team that plays the best defense is going to win the ball game.”

“Those teams run power and run right at you. They might throw the ball, but they want to establish the run,” said Homolka.

“(Coal Grove’s offense) is not the same type of running game. It wears on your linemen and it wears on a defense. Guys are going to get tired. You have to get guys in and out. You have to try and get three-and-outs.”

Lucas said the Dragons are similar to Wheelersburg. Both teams have played Wheelersburg with the Hornets losing 39-20 and Fairland losing 49-32.

“I would say they are close to what Wheelersburg does, but they have different types of personnel. Both of them can score,” said Lucas.

If it wasn’t for bad luck, the Rock Hill Redmen might have no luck at all.

Two weeks ago, turnovers down the stretch cost them in a loss to Coal Grove. Last week, two critical injuries to starters were factors in South Point’s comeback win.

The Redmen would like nothing better than for running back Chance Blankenship to duplicate last week’s game. Blankenship ran for 261 yards and scored three touchdowns.

River Valley has struggled to run the ball and will probably look to throw the ball much like South Point did last week. Quarterback Dayton Hardway and running back Mark Wray are the key weapons for the Raiders.

For the Vikings, it’s now a two-week season. Symmes Valley plays Oak Hill and Portsmouth Notre Dame back-to-back and needs to win both games to claim the Southern Ohio Conference title and to qualify for the postseason playoffs.

However, Oak Hill needs a win to clinch a share of the title.

South Point is in a must-win mode each week. Any chance the Pointers have of getting a share of the Ohio Valley Conference title or a berth in the postseason playoffs rides on winning their final three games.

Chesapeake won’t make it easy. The Panthers battle Fairland for more than two quarters last week. The Panthers trailed just 22-20 at the half before injuries began to take their toll.

The Panthers got solid games from running backs Chad Meadows and Maccoy Brown last week. By controlling the ball in the first half, Chesapeake was able to keep within striking range of Fairland.

On a side note, Chesapeake will conduct a dedication before the game. The school plans to name the field for Hall of Fame coach Phil Davis who coached the Panthers for more than 20 years.

The Fighting Tigers have been trying to play through youth, inexperience and injuries all season. Despite all the obstacles, Ironton could still qualify for the playoffs by winning at least two of their final three games. They would almost definitely qualify by winning all three.

The Fighting Tigers will face the second straight team with Ironton ties. Defensive back Jimmy Holtz played for St. Charles last week and he is the son of Billy Holtz who play at St. Joseph. Hartley has wide receiver Alonzo Saxton and running back Mateo Saxton, grandsons of Tino Boll who was a catcher on Ironton’s 1972 state championship baseball team.

One of the best places to git a meal isn’t any restaurant but the Knights of Columbus on Friday night.... read more