Getting cozy with snakes part of enrichment class 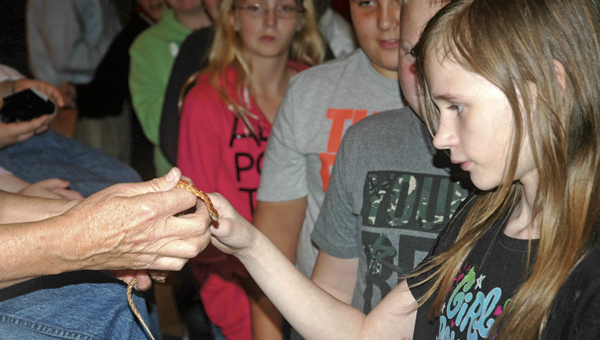 Students from Dawson-Bryant Middle School stand in line for a chance to pet a corn snake during a field trip to Raceland-Worthington High School in Kentucky.

“Snakes on a Plane” may be a terrible movie. But snakes in a play?

That was a learning experience for some Dawson-Bryant Middle School students that will likely stick with them for years to come.

The students got a rare two-for-one experience during a field trip Wednesday that aimed to fulfill one goal.

At Raceland High School, the middle school students watched “Old Ben,” a stage adaptation of the Jesse Stuart book of the same name and were able to participate in a demonstration with members of the Kentucky Department of Natural Resources (KDNR).

The goal of the trip was to help educate the students on snakes native to the region and what role they play in the ecosystem.

“Every animal has a purpose. Even Snakes,” Janet Nelson of the KDNR said. “People have lots of misconceptions about snakes, but they are really helpful in keeping away other pests like rodents.”

Nelson also hopes that the experience was able to help some students overcome a fear of snakes by letting them get an up close look at the animals.

“We let them pet our corn and black snakes,” she said. “Hopefully being able to get that close, see they aren’t slimy and aren’t all dangerous will help stymie some of the irrational fears they may have had.”

Nelson also stressed the importance of not handling snakes in the wild because they can be easily misidentified.

Students like sixth-grader Evan Gannon said the trip was a great chance to learn outside of the classroom.

“It was really fun,” Gannon said. “I didn’t know much about snakes and sometimes hearing about them in class gets boring. So it was really cool to get to come here and see some real ones and watch a play about them.”

The purpose of the day was to provide the students with memories and knowledge that they can carry with them into the future.

“The goal is that this is something these students will carry with them,” Nelson said. “We wanted it to be kind of light hearted but we still want these kids to learn.”

Eicher also said the stage production had benefits other than educating students about snakes.

“The play also features a lot of cultural themes unique to Appalachia,” Eicher said. “Sometimes you hear negative stereotypes so much that it’s good to get a greater world view of the culture.”

Dawson-Bryant Middle School works closely with the Jesse Stuart Foundation to provide learning opportunities for its students and have more events coordinated for the future.

The county prosecuting attorney and county treasurer have teamed up to take advantage of a section of the Ohio Revised... read more