A world within the world 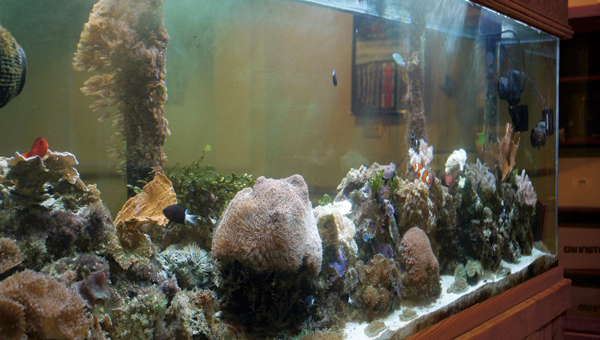 This saltwater fish tank on the second floor of the academic center at Ohio University Southern is a self-sustaining coral reef habitat. A project of biology professor Dr. Mike Millay, the tank contains various forms of sea life, some of which grew on its own several years after the habitat was created.

Among the hustle and bustle of students scurrying from class to class, there sits a fish tank. Many passersby might see it as the archetypal display of life underwater, but it is much more.

The 265-gallon tank acts as a partition in the academic center at Ohio University Southern, separating the main thoroughfare from a common sitting area on the second floor. Within the tank are various types of saltwater fish, coral, sea cucumbers, anemones and other creatures that exist in the ocean. What appears as a simple fish tank, however, is actually a self-sustaining coral reef habitat.

The habitat is a pet project of associate biology professor Dr. Mike Millay. One student in the sitting area said of Millay, “He must be in class, because if he’s not he’d be doing something with that tank.”

“Coral reef habitats are generally disappearing from the ocean because of high amounts of carbon dioxide in sea water and it is displacing the creatures who live in or around them,” Millay said. “It’s a little piece of the ocean in that tank.”

“We do feed the fish,” Millay said. “It’s important to put things like shrimp and crabs in there to keep the sand disturbed or it will go bad, so to speak.”

“Live” sand can spoil if the natural bacteria starve and create ammonia in the water.

“In our tank, things live and die just as they do in the ocean,” Millay said. “We allow them to grow and die because that is how it is. Most of the things in the tank grew there. Sometimes things show up we didn’t even know were in there. One type of coral just keeps reproducing over and over. It’s really astonishing.”

The tank has been at OUS for nearly a decade and Millay says he would like it to be there indefinitely.

Two types of clownfish — percula and skunk —reside in the habitat and are partly charged with the task of keeping the system going.

The third reproducing species in the tank is one with which Millay is particularly interested, the Pajama Cardinal fish. The Pajama Cardinal’s methods of conception and gestation are instances Millay has seen only twice in three years, and with good reason.

“The female Pajama Cardinal lays her eggs in the sand, where the male then fertilizes them,” Millay said. “The male then hatches the eggs in his mouth over a gestation period of 20 days, during which he does not eat. It’s really something to see.”

Millay has had his setbacks in regard to the tank over the years. He recalls one instance where a certain fish killed all the other fish in the tank.

“After he did that, I caught him and took him back to the pet store,” he said. “We now depend on natural selection to decide what lives and dies in that tank.”

20 miles of roadways set to be paved   A short qualifying statement at the end of a bid... read more