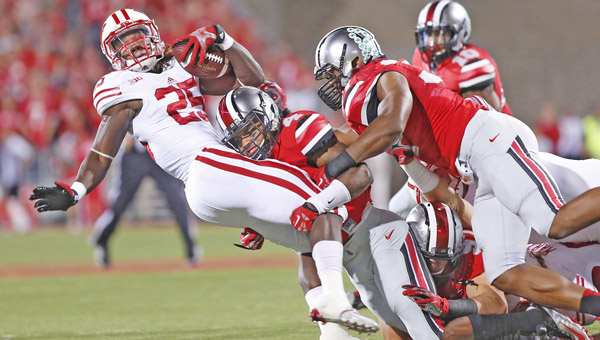 COLUMBUS (AP) — Ohio State quarterback Braxton Miller went home over the bye week and took the opportunity to watch a couple of college games on TV.

Among them was No. 1 Alabama winning big at Kentucky.

Miller believes that the Buckeyes can play with the Crimson Tide, the two-time defending national champions.

Coach Urban Meyer also watched a couple of games on the day off and also feels the Buckeyes could hang with the county’s elite.

But then he reverted to form, more concerned with what’s in front of him than any possible future dates in a potential Bowl Championship Series date with the likes of Alabama or Oregon.

“Human nature is, especially when you have time on a weekend of a bye week, to watch a lot of games (to see) how you match up,” Meyer said. “I kind of have these mechanisms in place just to stop thinking about (that), refocus on getting first downs and stopping people because that’s really not helping the cause at all.”

Linebacker Ryan Shazier went to a teammate’s house in Indiana over the weekend.

“I watched a little bit of college football. I saw a lot of good teams play,” he said. “I feel that we can play with any of them.”

Daydreaming about playing for national championships and in other big games doesn’t mean much if the Buckeyes (6-0, 2-0 Big Ten) don’t keep winning.

They’ve won 18 times in a row — the longest streak in the nation — heading into Saturday’s home game with Iowa (4-2, 1-1). But the Buckeyes aren’t expecting an easy time of it against the Hawkeyes — or the remaining five unranked teams waiting in the wings.

“Everybody dogs the Big Ten about not having a bunch of ranked teams. And it’s the SEC this, and the Pac-12 (that),” Ohio State center Corey Linsley said. “But, honest, you look at the history of Iowa and, just to name a couple of other teams, Penn State and Purdue. … The weeks that we have taken off, we have treated those teams as what the AP treats them as and what the rest of the country treats them as non-ranked opponents, those are the weeks we get beat.

“We’re not taking this week lightly and we’re not going to take the next seven weeks lightly.”

His coach agrees that the Buckeyes can’t waltz through the stretch run.

“We’ve got to find a way to win this Saturday, and it’s not easy,” Meyer said. “We’ve been in here for two weeks trying to figure out how to run the ball against this defense.”

Iowa is eighth in the nation against the run, permitting just 88.5 yards a game. The Hawkeyes are the only major-college team which has yet to give up a touchdown on the ground.

For what it’s worth, Iowa is also a member of the mutual admiration society.

“If you look at it, they’ve got a win streak that’s approaching 20 games,” Hawkeyes coach Kirk Ferentz said. “You don’t do that by accident. That requires good coaching and good players who understand you have to show up every week. They’ve done a great job of that now for a year-plus.”

Iowa can give a team fits, as has been the case in the last two meetings.

The Buckeyes needed overtime against a backup quarterback who was seeing his first substantial action to win 27-24 in 2009 at Ohio Stadium. They also barely hung on 20-17 in Iowa City in the most recent meeting in 2010, with the Big Ten’s rotating schedule keeping the teams away from each other the past two seasons.

Miller concedes that it’s hard trying to concentrate on the next opponent all the time — particularly a 17-point underdog like Iowa.

“It’s not easy to go out there every Saturday and win a game, especially in the Big Ten,” he said. “You’ve got to put up big points, make big plays and stop their offense.”