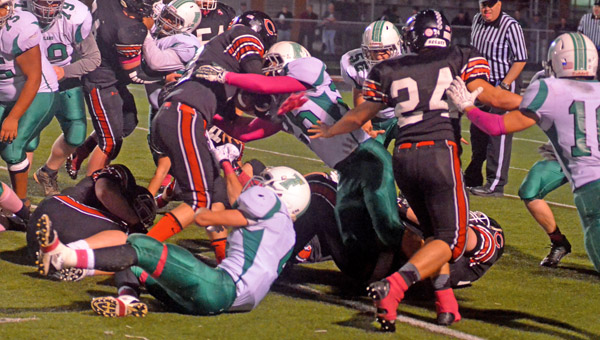 COAL GROVE — The Fairland Dragons might not be doing any car commercials like Will Ferrell, but they are certainly in the driver’s seat.

Dragons’ first-year head coach Cullen Homolka said his team had plenty to play for heading into the game. Fairland not only wanted to take a giant step toward winning the league, but qualifying for the playoffs and giving the seniors their first ever-win over Coal Grove.

“We’ve definitely got something to play for. The next two weeks are big. We’ve got to grind it out. It’s not over.”

Both teams put up some good offensive numbers, but the Dragons were able to convert their opportunities.

Fairland had 480 total yards with 220 coming on the ground. Evan Maddox had 18 carries for 120 yards and also caught three passes for 32 yards. Nathan Campbell ran 12 times for 71 yards and two scores and caught four passes for 45 yards and a TD.

Quarterback Chance Short was 18-of-21 for 260 yards and three touchdowns. Kyle Sowards caught eight passes for 119 yards and a score.

“The first half (Coal Grove) did a good job on defense against the zone. We had to respond and go to what would work next,” said Homolka. “Chance ran the offense and we have so many weapons. Everyone wants the ball.”

The Hornets usually control the clock with their running game, but they had only 35 attempts for 113 yards, Sid Tucker had 15 attempts for 53 yards.

Quarterback Jesse Rigsby was 14-of-30 for 198 yards and a touchdown. Conor Markins had another big game with five receptions for 94 yards and Joe Akers had three catches for 59 yards.

Backup quarterback Travis Carey was 2-of-2 for 62 yards as Coal Grove had 260 yards passing and 373 total yards.

A gamble by the Dragons early turned the momentum quickly in their favor.

Coal Grove was forced to punt on its first series and the Dragons appeared to be set to follow suit. However, Fairland elected to go for a first down on a fourth-and-4 at its own 31.

Maddox broke free on a 55-yard run to the Hornets’ 8-yard line. Three plays later Maddox ran the final yard for the touchdown at the 7:39 mark and it was 6-0.

Coal Grove got to the Fairland 23 only to turn the ball over on downs. Completions of 19 yards to Campbell and 34 to Maddox put the ball and the 7 and Campbell ran for the touchdown with 2:29 on the clock and it was 12-0.

Disaster hit for the Hornets as they fumbled the kickoff and the Dragons had the ball at the Coal Grove 23.

A couple of penalties backed the ball up, but Short hit Sowards with a 26-yard scoring strike and with 20 seconds to go in the quarter it was 18-0.

Coal Grove battle right back and went 64 yards in eight plays to score on a 7-yad run by D.J. Miller with 9:54 left in the half. Jonathan Joseph kicked the conversion.

The drive was highlighted by a 23-yard pass to Akers, a 15-yard pass to Markins on third-and-10, and a facemask penalty.

“Their line played exceptionally well on both sides of the ball. They’ve got so many kids who can run,” said Hornets’ coach Dave Lucas.

After a 58-yard punt by Markins to the Fairland 21, the Dragons went on a 12-play scoring drive that was kept alive by a 14-yard pass to Sowards on fourth-and-8.

Coal Grove quickly went 67 yards in 11 plays with Rigsby hitting Isaiah Gunther on a 7-yard pass with seven seconds on the clock. The conversion pass to Sean Paulus made it 31-15 at the half.

The Hornets took the second half kickoff and drove to inside the Fairland 1-yard line. But the Dragons defense stiffened and stopped the Hornets on three straight plays for no gain and took over on downs.

Fairland punted to the Coal Grove 9 and forced the Hornets to turned the ball over on downs at their own 44. Fairland needed just five plays to score as Short ran 8 yards and it was 44-15 with 10:46 to play.

Fairland ends the season with home games against Rock Hill and River Valley, both 1-7 on the season.

Coal Grove hosts Chesapeake next Friday and closes the season at South Point.

Jim Walker jim.walker@irontontribune.com   COLUMBUS — There have been some good teams on the Ironton schedule this season. And then... read more