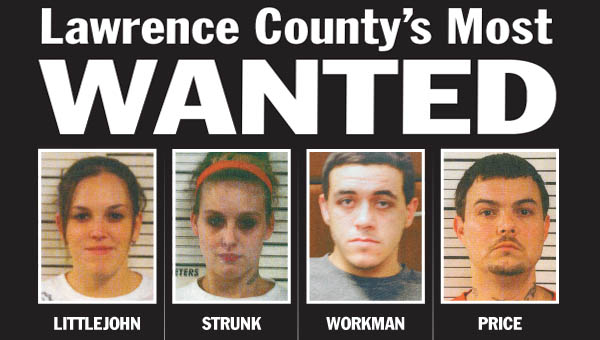 Lawrence County’s Most Wanted, a weekly series that debuted in The Tribune in October 2009, helped capture more than 80 percent of the offenders whose pictures where published.

When the Lawrence County Adult Probation Agency teamed up with The Tribune four years ago to find the county’s most wanted probation violators, tips from the community came flooding in.

Carl Bowen II, chief of the APA, said he hopes for the same reaction after today.

Lawrence County’s Most Wanted, a weekly series that debuted in The Tribune in October 2009, helped capture more than 80 percent of the offenders whose pictures where published, Bowen said.

“This was just another tool we could use to give us more eyes,” Bowen said. “Public eyes, more people out there that recognize these people that can lead us to their whereabouts.”

Lynne Stewart, director of the intensive supervised probation (ISP) offenders, said she remembered the impact the Most Wanted stories had on some of the department’s offenders.

“I think there was even one person who turned himself in because of it,” Stewart said. “‘I couldn’t take seeing myself in the paper.’ That is the best scenario. Just do the right thing. But it’s very rare.”

Bowen recalled a woman who made the list who was found in Colorado.

“Don’t ask me how they saw the Most Wanted but they were online and I guess they typed her name in and it popped up,” Bowen said. “Within 48 hours of being published the woman was picked up. It was a great hit there. And again, no law enforcement resources were used other than to pick up the telephone. We didn’t have to go out and start from square one. The public, they are your eyes and ears out there.”

The series concluded several months after it began, simply because it was so successful, there were not enough probation violators left to publish. But now, Bowen said, the filing cabinets are filling up with offenders who haven’t been seen or heard from in months.

This week’s Most Wanted Probation Violators are:

• Yvette Littlejohn, 29, was last known to be living in South Point. She is on probation for a conviction of two counts of aggravated trafficking in drugs. She failed to report to the probation department, prompting a warrant to be issued. She is 5 feet 7 inches tall and weighs 165 pounds. She has brown hair and brown eyes.

• Natasha Strunk, 26, was last known to be living in Ironton. She is on probation for an aggravated possession of drugs conviction. She failed to report to the probation department, prompting a warrant to be issued. She is 5 feet 4 inches tall and weighs 160 pounds. She has brown hair, hazel eyes and a tattoo on the left side of her neck that says “Timmy.”

• Chadwick Workman, 22, was last known to be living in South Point. He is on probation for grand theft conviction. He failed to report to the probation department, prompting a warrant to be issued. He is 5 feet 9 inches tall and weighs 200 pounds. He has brown hair and brown eyes.

• Paul D. Price Jr., 38, was last known to be living in Ironton. He is on probation for an attempted rape conviction. He failed to report to the probation department, prompting a warrant to be issued. He is 5 feet 11 inches tall and weighs 195 pounds. He has brown hair and brown eyes.

Of the 29 conditions offenders are required to comply to, failing to report to the probation department is the most common, Bowen and Stewart said.

“And I think that’s why they do stop reporting because they can’t pass a drug test or they know it’s not going to be a good report,” Stewart said. “It’s not that they just don’t want to come in and see us. If they were do everything they were supposed to be doing, why would they be afraid to come in and report. It’s either that they’ve got a new charge or they are back in full-blown drug use again or something has gone wrong.”

But simply not reporting to one appointment isn’t what sends up red flags for the APA, the officers said. It’s the offenders who haven’t been heard from in many months.

“And we give them every opportunity. It’s not just the first week they don’t come in that we put a warrant out,” Stewart said.

“We send courtesy report letters at their last known address,” Bowen said. “We’ll send them a certified letter saying, ‘Please get in here within two days so we can get this taken care of.’ They sign for it and they still don’t report.”

When the warrants are issued, probation officers attempt to serve the warrants, which is sometimes successful. Other times, the offender has fallen off the radar.

That’s when the community’s help is needed most.

Bowen also said the sheriff’s office and village police departments were instrumental in capturing many of the offenders who made the Most Wanted list.

“They make this work so well,” Bowen said. “It takes that team of law enforcement officers to really make this a success. Not to mention the wonderful readers”

He also said support from the judges is important.

“We couldn’t ask for a better support from both of our judges,” Bowen said. “They want community involvement and they also want community safety. When they place someone on community control sanctions, it’s not just, ‘Oh they get off on probation or whatever.’ We hold them accountable. We strive to make sure they follow the conditions on the way through from the start to the end.”

Anyone with information about the people on this week’s Most Wanted list may call the Adult Probation Agency at 740-533-4380.

The formula equated with getting to Carnegie Hall and scoring well in a band competition is no different: Practice. Practice.... read more