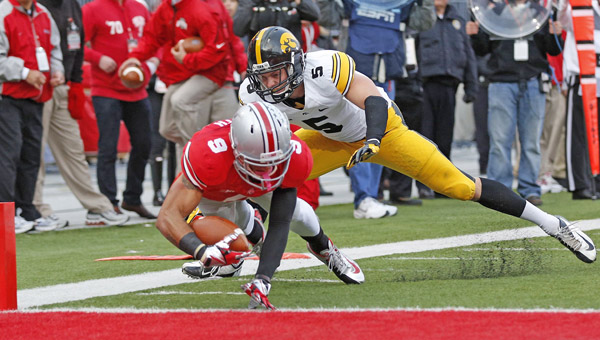 COLUMBUS (AP) — Ohio State line coach Mike Vrabel let slip a swear word as he was talking about how the Buckeyes’ defense got pushed around on Saturday.

Odds are, it wasn’t the only time a coach cursed that unit over the past few days.

“Call it what it was,” Vrabel said of Iowa doing what it wanted against the Buckeyes in the first half. “(They) beat the (crap) out of us.”

No wonder coach Urban Meyer and his staff have mixed emotions about the team right now.

On one side, they couldn’t be more pleased for the most part with the way things are going on offense these days.

Carlos Hyde was virtually unstoppable while running for 149 yards and two touchdowns, quarterback Braxton Miller passed for two touchdowns, ran for 102 yards and made very few mistakes and Corey Brown had three catches for 72 yards and a touchdown and made several big blocks, particularly as the Buckeyes bounced back from a 17-10 deficit.

“Offensively that was one of our better games since we’ve been here,” said Meyer, who ran his record to 19-0 since coming to Ohio State. “The second half is probably our best football we’ve played in a while.”

The linemen were singled out in the locker room after the game for their excellent play.

Things weren’t perfect — after all, the Buckeyes went into the fourth quarter tied against a team they were heavily favored to beat. But they did extend the nation’s longest winning streak to 19 while remaining in the hunt for a Big Ten division title and in the conversation on the national front.

“We’re not satisfied but we are happy with the win,” wide-out Devin Smith said. “We’re just going to take it and just keep getting better.”

Rest assured that no one was satisfied on a defense which had difficulty putting the clamps on the Hawkeyes (4-3, 1-2) until the final quarter. It is giving up 26 points a game in conference play.

“Can it be fixed? Absolutely. We’re still a good rush defense,” Meyer said. “We’ve got to continue to work because we’ve dealt with some injuries and depth issues and we’ve got to play better. (Still, I’m) very, very concerned.”

In the span of one response on Monday, he used the words “easy yardage” and “soft” and said the unit wasn’t physical.

He said he could excuse mistakes, but not a couple of other essentials.

“Effort and toughness have to be perfect for us,” he said. “You’re not going to make every single play; we understand that. No one is going to grade 100 percent. But we feel you should be able to grade a 100 percent in your toughness and effort.”

“I guess I’m not allowed to cuss, but I would say the same thing (as Vrabel),” defensive tackle Michael Bennett said. “There’s no any way around it, especially after watching film — they just beat the crap out of us.”

It’s not as if the defense was awful. It did redeem itself by stopping Iowa on three of four possessions (the other was an 85-yard touchdown play) in the second half.

“We came out in the second half with a chip on our shoulder like we need, but we can’t start a game like that again,” Bennett said. “I don’t know what the deal was. But I think it was, especially on the D-line, a mental thing. We were doing something different than we usually do.”

If it is distracted by what others think, that has been addressed.

After the initial Bowl Championship Series rankings came out on Sunday night, Meyer spoke with the squad about them, the polls, what people are saying about the Buckeyes, both good and bad.

He called it his “state of the union” address.

“My comment was that we are, indeed, in the mix: Embrace it. In the mix for what? Don’t worry about it. We are in the mix, though,” he said.

He told the Buckeyes, “People think very highly of you. Maybe some people don’t. You just have to go out and be the best team on the field on Saturday, not in the country.”

Those speaking to reporters on Monday said it was good to clear the air by finally talking about what could lie ahead. To this point, Meyer has refrained from discussing the BCS, rankings and bowl games.

“You’ve got to bring it up,” cornerback Doran Grant said. “Everybody’s talking about it. It’s right there. We know what’s at stake. All we’ve got to do is handle our business.”

CINCINNATI (AP) — Everything is going the Bengals’ way approaching the midpoint of the season. A pair of last-second victories... read more