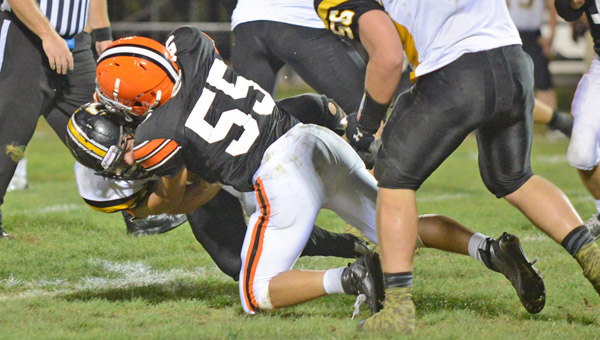 Vass said his team will have to be prepared for all phases of the game as they host the balanced Oaks Friday on senior night at Tanks Memorial Stadium.

“They like to run the ball and they’ll keep running it until you stop it,” said Vass. “But they can throw the ball and they will slip the pass in their on you if you try to stack the line of scrimmage. They’re pretty balanced.”

Although it is a non-league game for the Oaks, the game has plenty of playoff implications for both teams.

Ironton (2-6) needs to win its final two games to make the postseason. The Oaks are sixth in Region 21 of Division VI and can enhance its position with a win.

After beating Portsmouth Notre Dame and Symmes Valley the past two weeks, the Oaks (7-1, 3-0) are in line to win their fourth league title in five years.

Leading the Oaks’ offense are running back Willy Harris (5-9, 155) and quarterback Garrin Stiltner (5-9, 185) who moved into the position due to a preseason ACL injury to projected starter Clayton Christensen.

“It’s not surprising to me he’s been a good quarterback. Just watching him you can tell he’s a good athlete,” said Vass.

“Their backs are real big, but they all run hard,” said Vass.

The Oaks’ first team defense has allowed just five touchdowns in its wins this season.

Senior Justin Dickens (6-5, 195) was the SOC I Lineman of the Year last season and anchors the defense at defensive end and outside linebacker.

Waugh at inside linebacker and cornerback Jonathon Harrison (5-8, 130) were also all-conference.

“Their linebackers are good players and they have some pretty good athletes in the secondary,” said Vass. “Their defense is pretty active.”

The Price Is Right: Reds hire Price as manager