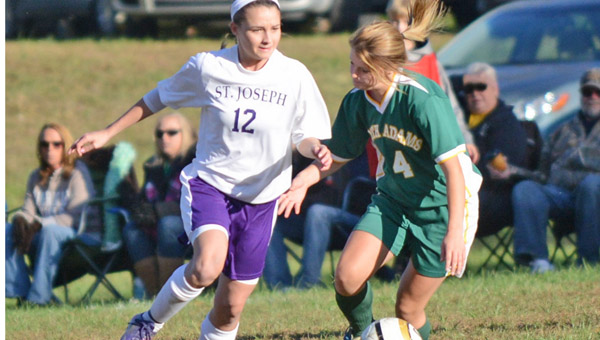 “This is one of the most amazing soccer games I’ve ever been part of,” said Female Flyers’ coach Kyle Weatherholt. “It was a fierce, physical battle from start to finish. I couldn’t be more proud of the girls. They’ve worked hard all season and they deserve this.”

Booker scored three goals — one on a penalty kick — to lead the St. Joseph offensive scoring. Emma Saxby scored a goal and Sidney Payne had an unassisted goal.

Kaylee Sheridan, Ophelia Weatherholt and Payne all had an assist.

In the 30-minute sudden death overtime period, Payne shot a pass to Booker who hit the shot in just the second minute of the extra period. The shot was blocked by the goalie, but Booker got the rebound and scored to end the game.

The goal capped a comeback for St. Joseph who fell behind 3-1 at the half.

Booker had a penalty kick at the 44-minute mark and Payne drilled a shot from 10 yards out to tie the game just six minutes later.

North Adams scored at the 60-minute mark to go ahead 4-3. With time running down, Ophelia Weatherholt sent a cross into the top of the box and Booker laced a power kick into the back corner of the net to tie the game.

“I’ve been around soccer my entire life and I have never seen a more beautiful goal on a high school field,” said coach Weatherholt.

St. Joseph will play West Muskingum in the district semifinals at 1 p.m. Saturday in Zanesville.

The apple butter made at the Lawrence Furnace Church must be churned for hours a day. The Church has been... read more