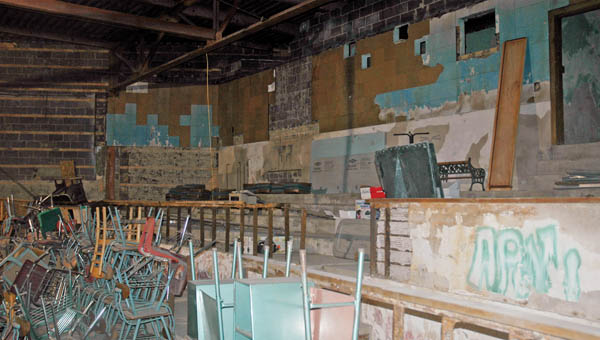 The stage of the Ro-Na Theater will once again be a platform for talent as a restoration project brings performers back to the historic theater.

In 2008 the Friends of Ironton began a project to renovate the Ro-Na Theater.

The job was a massive undertaking; one that group members knew would require plenty of time, effort and money.

“When we first started, this place was in terrible condition,” said Friends of Ironton member Skip Smith. “The roof in the main theater was completely gone and the rest wasn’t in much better shape. We knew it was going to be a long expensive endeavor.”

The project still isn’t near completion, but much progress has been made. So much in fact that the Ro-Na is once again hosting events.

This Saturday the Ro-Na will host a concert by the Ironton Rock N’ Roll All-Star Jam. Doors open at 6 p.m. and the cost is $10 a person. The following Saturday, Nov. 2, the theater will also host Downhome Decadence, a local thespian theater group that will put on a performance of the Rocky Horror Picture Show.

Proceeds from both events will go to the continued restoration of the Ro-Na.

“We’ve been holding concerts and stuff again for a little while now,” Smith said. “We are still a few years away from being finished. But to see where it was to where it is now, being able to bring people back in here and back to downtown is great.”

Getting people to visit downtown is something that FOI member Rick Jansen says may be the most important aspect of the renovation venture.

“We want it to be a place that people across the Tri-State come to for shows and other things we’ve got going on,” Jansen said. “It used to be that kind of place back in its heyday, and we want to bring that back. It’d be great for the surrounding businesses and restaurants in downtown.”

At its height, the Ro-Na was considered one of Ohio’s best theaters and attracted visitors from across the state and Tri-State. When it closed its doors in 1973, the theater began to fall into disrepair, leaving fading memories of a time when the city of Ironton was full of promise.

“The goal is to return it to its former glory,” Smith said. “We want to remind people that Ironton was once a thriving community full of potential. It still has the potential. We just have to remind folks of it.”

Restoring an old structure like the Ro-Na presents a unique set of problems to the FOI, such as trying to find materials that replicate those that were originally used.

“The most recent part of the restoration has been repairing the facade,” Smith said. “We kind of hit a snag though. The glass block used has a special curve to it. They haven’t made that kind of glass block since the 1960s.”

“Everything we do puts us a little closer to our goal,” Jansen said. “We want the theater to become a cultural hub of music and art, as well as becoming an education center by expanding people’s horizons.”

For more information about upcoming events, or how to get involved in the restoration effort visit www.Ro-Natheater.com

Symmes Valley Vikings’ quarterback Payton Hayes (8) looks at an opposing team defender and plans his next move as he... read more