‘Things are looking up’ 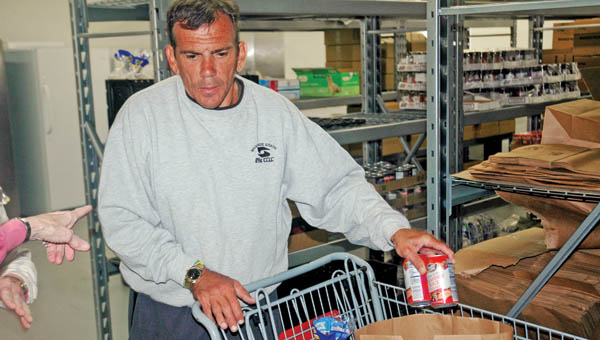 Michael Hampton arranges food in bags at Harvest for the Hungry food pantry in Ironton. Hampton spent two months homeless and now has an apartment, volunteers at the pantry and has joined church.

A clean-shaven, noticeably heavier Michael Hampton stood on a street corner in Ironton drinking a soda. Clad in black dress pants and a white T-shirt, he gestures a thumbs-up.

“Things are looking up,” he said.

In early August, Hampton, 42, after nearly five years left a group home in Ironton for what he describes as “a misunderstanding between two people.” Regardless of the reason, leaving the group home left Hampton penniless, by his own admission friendless, and homeless.

“I got into a relationship with someone at the group home,” he said. “I let some people in the house know about it and they didn’t believe me.”

A Gallipolis native, Hampton said in the past when he left the group home he stayed at his mother’s house, but she told him there wasn’t enough room this time.

For two hot summer months, he made his home a borrowed tent in a vacant field on the Ironton side of the Ice Creek Bridge just past the Coal Grove intersection. He ate when people brought him food, which was often. He slept whenever he could and used a rented portable toilet he recalls as his reason for choosing that field in particular.

In September, Hampton had a seizure and was hospitalized for two weeks. It was the first time in nearly three months he had slept somewhere other than his borrowed red tent.

“I suffer from grand mal and petit mal seizures,” Hampton said. “Turns out the medicine I had didn’t help and I hadn’t been able to get my medicine for a long time because I didn’t have any money.”

After his release from the hospital, Hampton stayed at a friend’s house for a little less than a week before going back to the tent in that field from which he had been granted a short reprieve.

He was only back in the field for a few days when he was notified that Housing and Urban Development (HUD) had found him a place to live.

Now he spends his days performing basic maintenance around his apartment complex across from the courthouse in Ironton and volunteering at Harvest for the Hungry. Excited about and appreciative of his new life. He says the one thing that makes him happiest is, even after all he endured, he has dedicated his life to the Lord.

“I got saved and baptized a couple Sundays ago,” he said. “There were times in that field when I thought I had too much on my shoulders to handle, but now I know I can handle more than I thought.”

Hampton is now a member of the Coal Grove Church of the Nazarene. Members of its congregation often brought him food and just as importantly, said Hampton, gave him some company.

“It was nice sometimes to have someone to talk to,” he said. “It got lonely in that field.”

Hampton remembers every person who gave him money or food during his time living homeless and says he kept a tally of money he was given — a total of $250.

It’s clear he doesn’t want to dwell on the past.

Several days a week Hampton can be found at Harvest for the Hungry in Ironton, unloading food and stocking shelves. He says he handles about 120 boxes a day.

“My back is killing me,” he said. “I stay busy and I get along with everyone who works there and everyone who lives in the apartment complex.”

Hampton has also been put on different medication and so far the seizures have stopped. He plans to use his experience to help others who are in similar situations.

“I have been helping homeless people any way I can,” he said. “People have been asking me a lot lately to pray for them. So when they ask I do it right then. Sometimes it’s all I can do for them, but I know it helps.”

Two Lawrence County businesses are looking to establish alcohol sales and one is looking to sell on Sunday, according to... read more