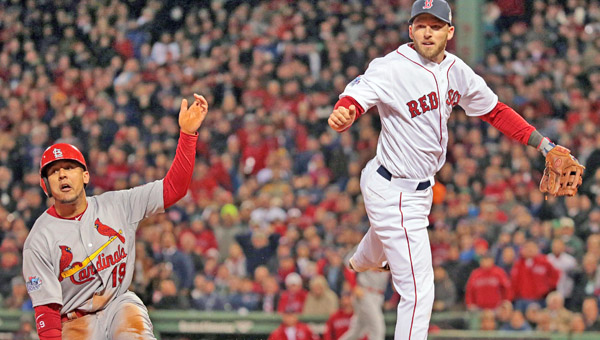 Jon Jay, left, of the St. Louis Cardinals and Boston Red Sox third baseman Xander Bogaerts watch an errant throw from pitcher Craig Breslow sail into the outfield, which allows Jay to score in the seventh inning in Game 2 of the World Series at Fenway Park in Boston on Thursday. he Cards rallied for a 4-2 win. (MCT Direct Photos)

BOSTON (AP) — Just when it seemed Michael Wacha had cracked, the St. Louis Cardinals began scooting around the bases and tied the World Series.

Wacha beat John Lackey in a matchup of present and past rookie sensations, and this time it was the Cardinals’ turn to take advantage of sloppy fielding as St. Louis topped the Boston Red Sox 4-2 Thursday night to even the Series at a game apiece.

David Ortiz put Boston ahead in the sixth inning with a two-run homer just over the Green Monster in left, ending Wacha’s scoreless streak at 18 2-3 innings — a rookie record for a single postseason.

But then Lackey, who in 2002 with the Angels became the first rookie in 93 years to win Game 7 of a World Series, faltered in a three-run seventh. St. Louis went ahead when Matt Carpenter hit a sacrifice fly that led to a pair of runs, with the second scoring on errors by catcher Jarrod Saltalamacchia and reliever Craig Breslow.

Carlos Beltran, back in the lineup after bruising ribs in the opener, followed with an RBI single.

“I wanted to be in the lineup. I worked so hard to get to this point,” Beltran said. “Somebody would have to kill me in order for me to be out of the lineup.”

Wacha, a 22-year-old right-hander, wasn’t quite as sharp and allowed two runs, three hits and four walks in six innings with six strikeouts. But he improved to 4-0 in four outings this postseason, matching the amount of regular-season wins he has in his brief career.

“He pitched outstanding,” Cardinals catcher Yadier Molina said. “Just one pitch, to a great hitter like Big Papi. We take our hat off to him, but I mean, he pitched good tonight.”

His parents and sister made the trip from Texarkana, Texas, and sat bundled in cold-weather clothes in the stands to watch Wacha, the 19th pick in last year’s amateur draft.

The Cardinals’ hard-throwing bullpen combined for one-hit relief, with Trevor Rosenthal striking out all three batters in the ninth for a save. He whiffed Daniel Nava with a 99 mph fastball to end it.

All three St. Louis pitchers Thursday night were 23 or younger.

“It doesn’t surprise me. Those guys got talent,” Molina said. “Like I said many times before, they’re not afraid to pitch.”

When the Series resumes Saturday night at Busch Stadium, Jake Peavy starts for the Red Sox and Joe Kelly for the Cardinals. Twenty-nine of the previous 55 teams that won Game 2 to tie the Series went on to take the title.

A night after the Cardinals made three errors in the opener and allowed the Red Sox to romp 8-1, the fielding failures were on the other side.

Given a 2-1 lead, Lackey walked David Freese with one out in the seventh and allowed Jon Jay’s single. Breslow relieved, and the Cardinals pulled off a double steal as pinch-runner Pete Kozma swiped third.

It was an uncharacteristically aggressive move for the Cardinals, who ranked last in the National League with 45 stolen bases this year.

Daniel Descalso, who started at shortstop after Kozma made two errors in the opener, loaded the bases with a walk. Carpenter followed with a fly to medium left, and Jonny Gomes’ throw home was slightly to the first-base side of the plate as Kozma scored the tying run.

Saltalamacchia allowed the throw to glance off his glove as Jay took off for third. Backing up the plate, Breslow hesitated before throwing to third, then sailed a high throw into the stands as Jay came home with the go-ahead run.

Beltran, making his first Series appearance at age 36, singled to right for a two-run lead.

A few hours before the game, Cardinals manager Mike Matheny wasn’t even certain Beltran would be able to play. The eight-time All-Star was sent to a hospital for scans Wednesday night after bruising ribs while banging into the right-field fence to rob Ortiz of a grand slam.

Beltran said he was given painkillers, and he appeared to be wearing protective padding under his jersey.

Matt Holliday, whose ninth-inning solo homer in the opener avoided a shutout, led off the fourth by driving a 92 mph fastball to the deepest part of Fenway Park, near the 420-foot sign below the triangle section of the bleachers in right-center. The ball hit with a thud off the low fence on the side of the Boston bullpen, ricocheting across toward straightaway center.

Matt Adams lined to second baseman Dustin Pedroia, who made a diving catch with the infield halfway in. Molina followed with a bouncer over the 6-foot-6 Lackey that was grabbed by Pedroia, who realized his only play was to first as Holliday scored.

Ortiz erased that with his 17th career postseason homer and fifth this October, pouncing when Wacha left an 85 mph changeup in the middle of the strike zone.

NOTES: The Red Sox had not lost in the Series since Game 7 in 1986 against the New York Mets. … With the loss of the designated hitter in the National League city, Red Sox manager John Farrell said Ortiz will likely play first base in Game 3. Mike Napoli would sit. … Victims of the Boston Marathon bombings were honored during the seventh-inning stretch as singer James Taylor led the crowd in “America the Beautiful.”

COLUMBUS (AP) — Even though he still harbored doubts about the coaching staff, Corey “Philly” Brown was a very productive... read more