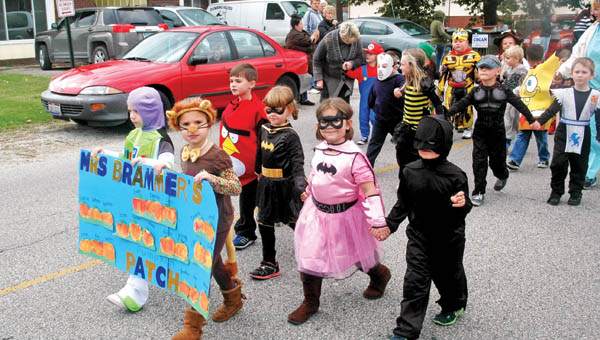 SOUTH POINT — Park Avenue in South Point was overrun by creatures from the netherworld this past Friday.

Sean Hackney was the parade’s grand marshal; a fifth-grader who achieved such a status by having the most accelerated reader (AR) points.

“Sean has 150 points, the most in the school,” Bill Christian, assistant principal at South Point Elementary, said. “This is the second year in a row our grand marshal has been a boy.”

Other students with lots of AR points were also rewarded during the parade. A hayride float sponsored by the South Point Church of the Nazarene carried the top two AR-point-earning students in the first and second grades. The top two point-getters in the third, fourth and fifth grades were treated to a ride on a fire engine from the South Point Volunteer Fire Department.

“The (South Point) fire department is our big sponsor,” Christian said. “They do everything they can for us. The fire department and the church doing those floats really made this year’s parade even better.”

Students’ costumes ranged from the traditional vampires and witches to an array of superheroes and video game characters, such as “Steve” from the popular game Minecraft.

Arrest made in Metro robbery

SOUTH POINT — One arrest has been made in the September robbery at the Metro Cab Company in South Point... read more