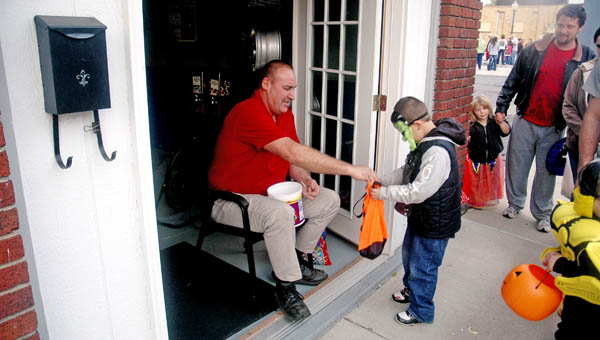 Charlie Haas, owner of Charlie’s Tire Sales in Ironton, hands out candy during Safe Trick or Treat on Monday.

Droves descend on downtown during Safe Trick or Treat

Several people with children in tow said Monday’s Safe Trick or Treat in Ironton was the largest one they can remember.

“I’ve got my grandbaby here tonight,” Ironton resident Edna Gill, whose 3-year-old grandson Myson Schneider was busy collecting candy, said. “We are just trying to get in the door. This is the most people I have ever seen here.”

Gill was waiting outside of City Center, where inside many local businesses, departments and agencies were handing out candy. Other downtown businesses that were not at City Center stayed open well past normal hours and divvied up candy to the hundreds of people flocking to the middle of downtown. Candy was provided by the Lions Club.

South Point resident Carla Neal had her three costume-clad children, ages 6, 5 and 3, at the event.

“This is just crazy,” Neal said. “This is my third year coming to this and the kids love it. But I never thought it would be so crowded.”

Inside City Center was the nucleus of the event and building custodian Carolyn Sheridan was charged with the daunting task of controlling the crowd.

“I am trying to control it but there are just so many people who want in the building it’s making it tough,” she said. “A lot of people being here is a good thing though because it shows people appreciate and enjoy this.”

At 7 p.m. the crowd moved from Third Street to Second Street for the Halloween parade, which ended with a costume contest at the spray park.

People who entered the contest had to get number, which was pinned somewhere on their costume.

As the parade concluded everyone with a number walked past a flatbed trailer where members of the Rotary club wrote down the numbers of participants they thought were the best in each of five categories — best witch, best ghost, scariest, cutest and most patriotic.

Rotarian Mike Hurley said approximately 450 numbers were given out, which is the most he can remember.

Police on lookout for car vandals