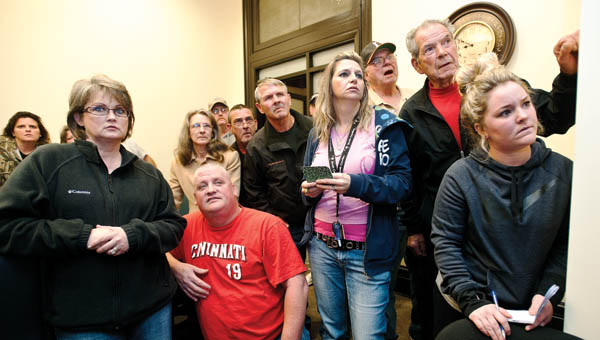 Lawrence County has more than 47,000 registered voters but only a small fraction of those people came out to the polls Tuesday.

Volunteers at the Elizabeth 1, 2, and 3 precincts said it was slowest year they had ever seen.

Jack Kidd, who has volunteered for five years, and Diane Nance, for 16 years, said they couldn’t recall a year where the voter turnout was so low.

“There wasn’t really anyone running,” Kidd said. “That’s what it was.”

With all 84 precincts reporting, only 10,892 votes were cast — about 22 percent of registered voters in the county.

A large majority of the candidates were unopposed, McCown said.

The courthouse, usually a bustling hub on Election Day, was noticeably quieter than in years past.

But, according to BOE member Randy Lambert and McCown, the days of standing around the courthouse waiting for results to come through may be over.

This year, the BOE rolled out election results live through a website, electionsonthe.net.

“As soon as the (accumulations) are entered, they will be entered on the (website),” Lambert said just after the polls closed.

McCown said the website was a way to get results out to the public quickly and take some of the burden off BOE staff and volunteers.

“We still had people calling in constantly,” McCown said. “This takes the stress and additional workload off the staff.”

And for people who don’t want to come to the courthouse, the live feed of results is just more convenient, he said.

Three of the four people elected to Ironton City Council on Tuesday have been there before. Incumbents Beth Rist and... read more