Industrial park to get new resident 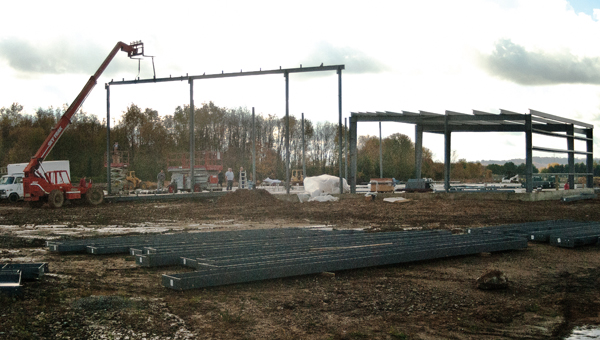 Construction of the new Ken/API Supply distribution center has begun, and is set for completion at the start of 2014.

SOUTH POINT — The Point industrial park will be the new home to a building supply company.

Ken/API Supply is hoping its new distribution center will be open by the beginning of 2014.

“We’re shooting for the beginning of the new year,” said John Votel, president of Ken/API Supply. “I think we’ll get there. The construction crew is working hard and a lot of progress has already been made.”

Votel says that location of The Point played a huge role in the decision to open the new distribution center that will take the place of two current local centers.

“We have two centers right here in the Tri-State, one in Ashland and one in Chesapeake, Votel said. “There really wasn’t a need for both of those if we could combine them.

“We chose The Point because it’s in a great spot. There is excellent infrastructure here, good road and rail systems all right here.”

Ken/API Supply services Ohio, Kentucky, West Virginia and parts of Indiana. Votel says being able to be close to major cities in the region also adds to the location of The Point.

“We’re just a matter of minutes from both Ashland and Huntington,” Votel said. “Plus just a couple hours from Cincinnati, Columbus, Lexington, Louisville and Indianapolis, so it’s just a great spot for our distribution center.”

Interventionist to offer advice on working with students   The seventh annual Counselor Day is set for 9 a.m.... read more