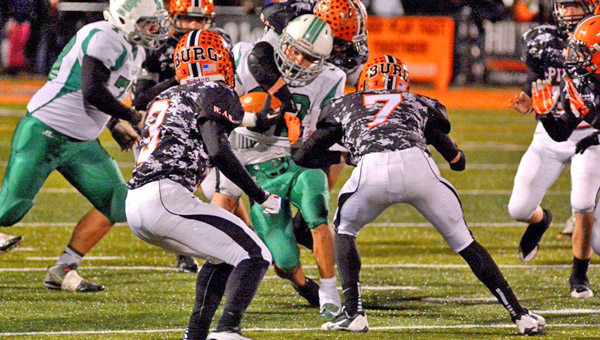 Fairland Dragons’ running back Evan Maddox (32) runs inside against the Wheelersburg defense. The Pirates’ Austin May (7) and Tyler Claxon (3) attempt to make the stop. Fairland lost the playoff game 40-21. (Kent Sanborn of Southern Ohio Sports Photos)

WHEELERSBURG — What a difference a half can make.

After Wheelersburg scrambled to take a 26-21 halftime lead over Fairland, the Pirates’ defense came to life in the second half and shut down the Dragons’ offense to came away with a 40-21 win Saturday in a Division V Region 17 quarterfinal playoff game.

“Field position killed us in the second half,” said Fairland coach Cullen Homolka.

“But give Wheelersburg credit for playing a smart, physical and fast game. They were able to play at their tempo and that’s what we want to do is force teams to play at our tempo.”

Wheelersburg (10-1) took the opening kickoff and went 52 yards in five plays to score. Christian Ellis ran 11 yards for the touchdown and Daylor Lewis kicked the conversion for a 7-0 lead just 63 seconds into the game.

An interception by Evan Maddox gave Fairland the ball at the 43. It took the Dragons just four plays to score as Maddox did the honors with a 15-yard run. Isiah Vidal’s conversion tied the game at the 7:39 mark.

The Wheelersburg kickoff went into the end zone, but that proved to be no problem for the Dragons who went 80 yards in six plays. Maddox bolted 40 yards up the middle for the score and it was 14-14 with 44 seconds to go in the quarter.

The back-and-forth scoring pattern continued as Wheelersburg went on another scoring drive that ended on a 1-yard plunge by Eddie Miller. However, the conversion kick was blocked and it was 20-14.

A failed onside kickoff with a 15-yard penalty gave Fairland the ball at the Pirates’ 34. Five plays later, Maddox went 2 yards for the score and Vidal’s kick put Fairland ahead 21-20 with 7:46 to go in the half.

Wheelersburg regained the lead with a 78-yard, 7-play drive. Parsley added his second 1-yard scoring run for a 26-21 lead at the 4:57 mark. The conversion pass failed.

The Dragons threatened to retake the lead as they drove to the Pirates’ 14. Fairland passed on the field goal and a fourth down pass was intercepted in the end zone with 1:50 left in the half.

Two big keepers by Miller got the ball to the Fairland 15 with 13 seconds left. Lewis attempted a 32-yard field goal that went wide left as the half ended.

Fairland moved to the Pirates’ 29 to start the second half, but Dylan Miller intercepted a pass in the end zone to stop the threat.

The Pirates used the turnover to score on a 67-yard screen pass to Austin May with 6:58 on the clock. The conversion pass failed and the lead was 33-21.

Wheelersburg got to the Dragons’ 10-yard line to start the fourth quarter. Fairland’s defense held and the Pirates’ Dylan Miller tried a 27-yard field goal that was wide right with 11:07 left to play.

A 56-yard punt by Dylan Miller pushed the Dragons back to their own 5-yard line. Fairland moved the ball out to the 40, but Dylan Miller picked off his second pass of the game.

A fourth interception — this one by Chase Burk — led to a 17-yard scoring by the Micah McAlister with 1:50 left to seal the outcome at 40-21.

The Dragons had 434 total yards of offense with 180 coming on the ground. Maddox ran 18 times for 145 yards and three touchdowns.

Quarterback Chance Short was 22-of-35 passing for 254 yards but he was intercepted five times. Kyle Sowards caught seven passes for 136 yards.

Wheelersburg racked up 502 total yards including 324 rushing on 56 attempts. Quarterback Eddie Miller ran 23 times for 189 yards and three scores and was 6-of-15 passing for 160 yards and two interceptions. May caught three passes for 100 yards.

Martins Ferry rallied to beat Westfall 30-28 to set up a regional semifinal game with Wheelersburg.

Buckeyes balance too much for Bears

COLUMBUS (AP) — Morgan State coach Todd Bozeman was asked what his team got out of an 89-50 loss to... read more