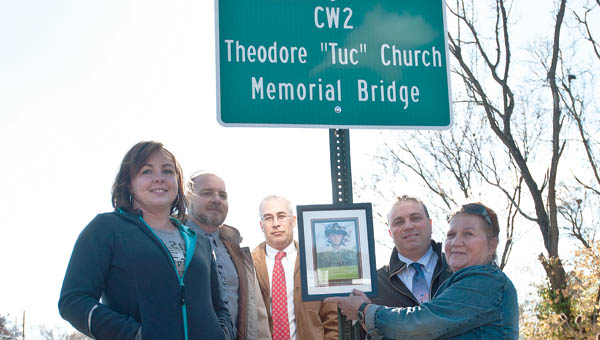 Theodore Church’s widow Mindi Church, left, and other Betty Church, right are seen with all three Lawrence County Commissioners during a bridge dedication in Church’s name Friday. Church died in 2007 while serving in Iraq.

SOUTH POINT – Betty Church twisted a white Kleenex over and over in her hands, sometimes touching it to her wet eyes yet never giving way to those tears as others paid tribute to the son whose memory she wants never to die.

Theodore Ullum “Tuc” Church was killed in Iraq on Memorial Day 2007 when the helicopter he was piloting was shot down. He was only 32 years old.

On Friday his family and friends stood along County Road 1 in Burlington as the county dedicated a bridge to always be known as the Theodore Ullum Church Memorial Bridge.

He praised Betty for her persistence in getting this memorial.

“She wouldn’t let it die for her son,” Pratt said.

Then the commissioner asked those gathered if they would share their memories of Church.

First to speak was his mother-in-law, Marcinda Mers.

Then Commissioner Les Boggs praised Church and every American soldier.

“Every single soldier has given something,” Boggs said. “Some have given their lives. This is not just for him and his family but for every soldier serving in every war, their bravery and courage demonstrated.”

Following Commissioner Freddie Hayes’ reading of the poem “To Honor Our Fallen,” members of Church’s family pulled the white wrapper off the sign, while Betty cradled a photograph of Church.

About an hour later there was a similar gathering on County Road 59 at the bridge going over Big Branch Creek for another fallen hero. This time it was Donald Ray Blankenship who died on July 7, 1968, at the age of 19 in Vietnam.

First Blankenship’s high school buddy, Jimmy Moore, introduced fellow Vietnam veterans and those who graduated in the Class of 1966 from South Point High School with Blankenship.

Again, the white wrapper covering the sign was removed as the family posed for photographs taken by the crowd. As they walked away, they took another glance at the memorial to their brother and father.

“I am proud to be his daughter,” Carver said. “My grandmother and I used to cross this bridge every Sunday on our way to church. It brings back a lot of memories.”

Alonzo Jenkins spent over a year fighting in Vietnam — a war that wasn’t exactly popular with the consensus —... read more