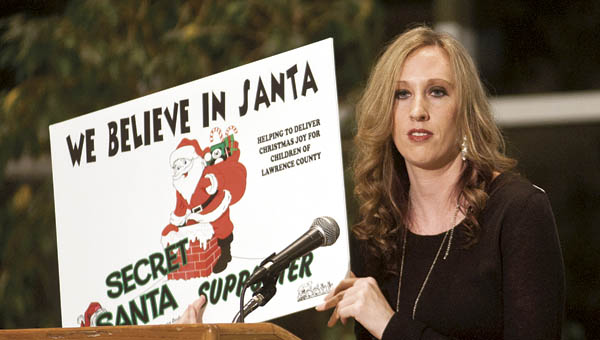 Jessica Cornette receives the Young Professional of the Year award

It was business, as usual, on Tuesday at the Lawrence County Area Chamber of Commerce Annual Awards Dinner.

The Riffe Center Mains Rotunda was filled to capacity as local business owners and leaders gathered to recognize and be recognized for their continued roles in sustaining and expanding the economy in Lawrence County.

Many of the speeches made, by both presenters and award recipients, referenced the Gateway project, which is the construction of a Holiday Inn Express and Suites and a Frisch’s Big Boy in Ironton. Announced was a groundbreaking for the project which will be at 1 p.m. Tuesday, Nov. 19, at Ninth and Washington streets in Ironton.

The night’s award-winners were Jim Earl Jr., who was named 2013 Business Person of the Year, Ron Lyons garnered 2013 Entrepreneur of the Year, Bill Dickens was named the 2013 Small Business Advocate, Dave Milem was honored as the 2013 George Patterson Community Servant and Jessica Cornett was recognized as the 2013 Young Professional of the Year.

“Tonight is about saying ‘thank you,’” Ted Edwards, out-going chamber of commerce president, said during the welcome and introduction. “It’s good to see so many people here.”

After the Ironton High School Varsity Singers led the crowd with the national anthem and chamber treasurer Casey Baker recited the Pledge of Allegiance, the first award of the night was announced.

Massie Schemmel presented Cornett with the Young Professional of the Year award.

“(Jessica) is the perfect example of the type of people we need to attract to our area,” Schemmel said. “We are lucky to have her in our community.”

Cornett is a laboratory client services representative at Our Lady of Bellefonte Hospital and current chair of the Lawrence County Young Professionals.

“We are having our silent auction to raise money for our Secret Santa program,” Cornett said. “We plan on helping 400 children this year, but, I’m ambitious, I’d like to help 500.”

Cornett read a list of individuals and businesses that donated items for the silent auction but also mentioned the LCYP’s diversity.

“We also hold a cleanup day and a chili fest,” she said. “We are also involved in pretty much any other program we can get our hands on.”

Father David Huffman gave the invocation before the buffet-style dinner of steak, potatoes, green beans, chicken and rolls was served.

WSAZ news anchor Tim Irr was the master of ceremonies for the event.

“It’s a great privilege to be here and be a part of this,” Irr, who as acted as master of ceremonies in the past, said. “This event has grown just as the chamber has grown and the businesses in the area have grown.”

The IHS Varsity Singers, under the direction of Kathryn Price, sang “Seven Bridges Road” and “Broken Hallelujah” before the first “surprise” award of the night was announced.

Bob Compton presented Dickens, who did not know before it was announced, with the 2013 Small Business Advocate Award. Compton gave a history of Dickens’ involvement in business and development both before and post retirement.

“He’s a great friend and a man of his word,” Compton said. “He’s a man of many talents.”

Dickens was humble after accepting the award.

“This is a surprise — a shocking surprise,” Dickens said. “What I have done in this area in regard to economic development I could not have done by myself.”

Dickens mentioned some of the projects on which he has worked, such as the redevelopment of the River Valley Hospital site, the restoration of the Ro-Na Theater, the Gateway project and riverfront development. He is an adviser to the Lawrence County Port Authority.

“I’m very proud of what we’ve done with the riverfront,” Dickens said. “But I have to thank those who worked with me and supported me in these endeavors.”

Doug Korstanje then presented the 2013 George Patterson Community Servant Award to Milem, who was also unaware he would be receiving an award at the dinner.

“He has owned and operated a number of successful businesses,” Korstanje said. “He’s not just a builder of buildings, but also a builder of people.”

Milem joined the Army at age 17 and after being discharged has been in Lawrence County ever since. Korstanje said Milem has donated his time to build the Ironton Spray Park and assist in the preservation of the Burlington jail, as well as having a hand in the Ro-Na Theater restoration, the building of The Point industrial park, St. Mary’s Ironton campus, the Ironton-Lawrence County Community Action Organization’s Rome medical campus and the new hotel development.

“His work has made Lawrence County a better place to live,” Korstanje said.

The chamber’s intent was to surprise Milem, and surprised he seemed to be.

“I wondered who was going to get this award,” Milem said. “I thought of a hundred names and mine wasn’t one of them.”

Milem has worked on a long list of projects since his official retirement, but he admits he doesn’t necessarily see it as work.

“Retirement, to me, is working because you want to, not because you have to,” he said. “I appreciate this, but I think there are other people more deserving than I am.”

The 2013 Entrepreneur of the Year was Lyons, who was presented the award by Ron Eastham of the engineering firm Eastham and Associates.

Lyons owns River’s Bend Health Care in South Point and owned the property in Proctorville where the Wyngate at RiversEdge is being built.

“I was surprised when I was told I won this award,” Lyons said. “What we have done over the last 10 years is provide cheerful, clean places for people to live where their quirkiness is accepted.”

A video made by the Ohio University Southern electronic media department profiled Orica’s Jim Earl, the 2013 Business Person of the Year. The video was narrated by former WSAZ news anchor and chamber director Bob Smith, who also presented Earl with his award.

“We’re neighbors, but I haven’t gotten to know him too well because he’s never there,” Smith said. “He’s always traveling for his business.”

“If not for the long hours put in by so many people none of this would be possible,” he said. “I don’t know if anyone has gotten this award two years in a row, but we’re going to give it a shot.”

New chamber officers were installed and the results of the silent auction were announced before the IHS Varsity Singers closed the dinner with a rendition of “America The Beautiful.”

COAL GROVE — Members of the Coal Grove Memorial United Methodist Church are having a Christmas Bazaar to raise... read more