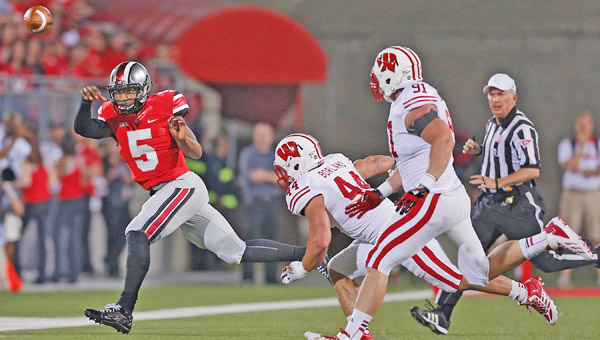 COLUMBUS (AP) — Two teams, each 9-0. They play in the same league. They’re both highly ranked.

If you’re comparing the 2012 Ohio State Buckeyes and the current version, coach Urban Meyer has the answer.

Meyer is careful to not insult last year’s team, which definitely started from the lowest rung on the ladder. Those Buckeyes followed a dreadful 6-7 season by going a surprising 12-0.

They posted only the sixth unblemished season in the programs 123 years despite being deprived of the incentive of playing in a bowl game. That was taken off the table because of NCAA sanctions stemming from former coach Jim Tressel’s failure to disclose he knew of players likely taking improper benefits in 2010.

“I don’t want to ever disrespect our (2012) seniors because they were such an incredible group of players,” Meyer said. “And they were really good players, too.”

He said the difference is when Ohio State has the ball.

“(Which team is better is) an interesting conversation, but we’re just more functional, certainly on offense,” Meyer said. “We’re much better on offense than we were a year ago.”

The numbers support his position.

Through nine games — and heading into a game with Illinois, just like the 2012 team was — this year’s Buckeyes are averaging 100 yards of total offense and 13 more points per game.

Playing a similar schedule, the 2012 Buckeyes, ranked No. 6 through nine games, were averaging 432 yards of total offense per game, 248 rushing and 184 passing. That squad was averaging 38.6 points a game.

“Last year there were some games that teams played us real heavy in the box because we couldn’t do as much with our passing game,” said starting offensive lineman on both teams, Jack Mewhort. “But this year it’s a lot different. There’s not eight or nine guys in the box because this offseason Braxton and the receivers and the running backs and all the skill guys got together and decided they were going to be really good this year. They’ve done that so far.”

As a sophomore, quarterback Braxton Miller was also the team’s best rusher. So picking up first downs — not scoring quickly — was a priority.

Through nine games, he was completing 56.6 percent of his passes for 12 touchdowns with six interceptions.

This year, despite missing almost three full games with a sprained knee ligament, he is completing 72.5 percent of his passes for 15 touchdowns with three interceptions.

“I feel that we execute a lot better than we did last year,” wide receiver Evan Spencer said. “Once we get rolling, we’re rolling. There’s not many people who can stop us.”

Consider also that Carlos Hyde has shown vast improvement at running back this year. In 2012 at this juncture he had 600 yards in seven games; so far this season he has 701 in six games.

Meyer also said the Buckeyes are better on special teams. But stopped short of saying his latest defense was ahead of last year’s.

Most people attribute that edge not to personnel or depth or star players, but rather to strong leaders on the defensive unit.

“Last year’s team we had the heart and the leadership. I don’t know if we necessarily were as talented, but we had the will to win,” said linebacker Joshua Perry, a backup a year ago and a starter now. “This team has the same will to win but we’ve got a little bit more juice behind us, too, talent-wise. Our defense is a little quicker and on offense we’ve got some tools now.”

The 2012 defense, led by linemen John Simon, Johnathan Hankins, Garrett Goebel and Nathan Williams — all of whom graduated except for Hankins, who jumped to the NFL early — came into its own late in the season.

The statistics don’t point to a stronger defense a year ago. The present defense still has a ways to go, particularly without nine starters from last year’s unit.

“On defense I’m not sure we’re quite as good. Remember this time last year is when we hit the accelerator and we played excellent defense,” Meyer said. “We are getting a little better on defense. We’re much better on offense than we were a year ago, but defensively I’m not sure.”