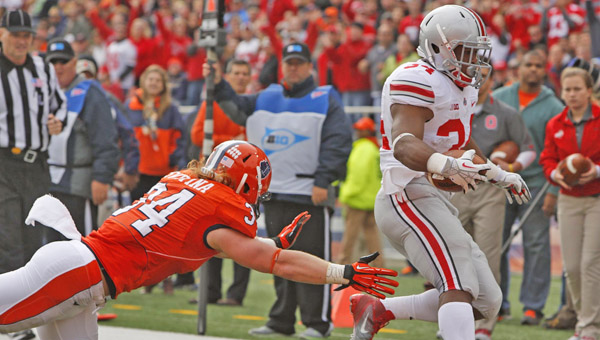 CHAMPAIGN, Ill. (AP) — Breaking into the open field for a late, long touchdown run Saturday at Illinois, Ohio State running back Carlos Hyde wondered why it hadn’t all come this easy for the Buckeyes.

Hyde finished the day with the kind of numbers that usually come with an easy win: 248 yards rushing with four touchdowns on the ground and another through the air. Quarterback Braxton Miller wasn’t far behind with 184 yards rushing and two more touchdowns.

Illinois, though, fought back. Quarterback Nathan Scheelhaase led the Illini with 288 yards passing and two touchdowns. But the Buckeyes defense kept him under pressure all day, sacking him five times and hitting him more than that.

“He’s been great for us and did get great in the end for us,” he said. “It did get tight. Offensively, we did need the help.”

“An L is an L,” Illini head coach Tim Beckman said. “These kids fought, they know they fought. … I’m proud of them for doing that, but they’re just like everybody else is, they want a W.”

After trailing 28-0 in the second quarter, Illinois closed to 35-21 in the third on two Scheelhaase touchdown passes.

Illinois had the momentum when the Buckeyes’ Ryan Shazier sacked backup quarterback Reilly O’Toole in the end zone. Illinois recovered his fumble but the safety gave the Buckeyes a 37-21 edge and the ball. Minutes later, a Hyde touchdown put them up 44-21.

It was one of the hits on Scheelhaase that kept Ohio State in control when Illinois was getting back into the game.

After Illinois closed to within two scores at 35-21, Scheelhaase had his helmet ripped off at his own goal line. Under the rules, he had to leave the game for a play, bringing O’Toole on.

The Buckeyes teed off on the backup quarterback, with Shazier hitting him from behind and knocking the ball loose. Tight end Matt LaCosse recovered the ball for Illinois to limit the damage to the safety.

The momentum swung swiftly back to the Buckeyes.

On the following drive, Ohio State moved quickly to the Illini 8-yard line.

Miller rolled left and threw an incomplete pass before taking a big hit from linebacker Jonathan Brown. The quarterback stayed on the turf for a time before briefly leaving the game.

Backup Kenny Guiton came on, handing off two plays later to Hyde for the 1-yard touchdown that put the game firmly back in the Buckeyes’ grip at 44-21.

Miller’s minute or so on the turf was a long one for the nervous Buckeyes, but he returned during the next series and finished the game. He finished with 150 yards and two touchdowns.

“We weren’t really playing a good game, but we still put up 60 points,” said Miller, who added that he was fine after the hit. “Just gotta put a hard effort in and, toward the end of the game, you gotta give it your all.”

Thirty-six seconds into the game, Miller ran up the middle of the Illinois defense for a 69-yard touchdown and a 7-0 lead. He slowed at about the Illinois 5-yard line, jogging the last couple of steps.

Over the next 15 minutes, it looked like it might be just that easy for a Buckeyes team in search of big wins that might convince voters that they belong in the national title picture.

Hyde put the Buckeyes up 14-0 with just under five minutes left in the opening quarter on an 18-yard touchdown pass from Miller.

In those first 15 minutes, the Illini offense consisted of 88 yards and a pair of Scheelhaase interceptions.

But the Illini just wouldn’t go away.

Down 28-0, V’Angelo Bentley returned a punt 67 yards for a touchdown with 7:29 left in the half to get the Illini on the board.

Then, down 35-7, Scheelhaase engineered two scoring drives that got Illinois back in the game.

“I love guys like that,” he said. “I told him after the game he was a great player. I thought he was hard to defend today.”