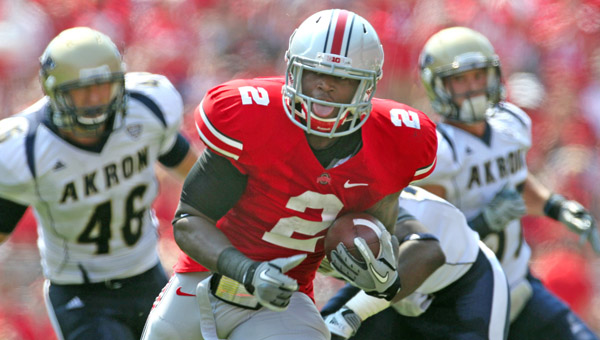 Ohio State’s injured safety Christian Bryant will be introduced Saturday as the Buckeyes honor their 18 seniors before the Indiana game. (MCT Direct Photos)

COLUMBUS (AP) — When Ohio State’s 18 seniors are introduced before Saturday’s final home game against Indiana, most will run across the field to a thunderous ovation.

One will hobble out on crutches — and may get the warmest reception of all.

Safety Christian Bryant, called the heart of the defense by coach Urban Meyer, broke his left ankle on the next-to-last play of the big victory over Wisconsin almost two months ago.

“It’s going to be one of those emotional days for me, knowing it could be my last game in the ‘Shoe,” Bryant said this week. “I feel it’s going to be a great experience.”

On Saturday, most will be smiling and celebrating, while Bryant may be left to think about what might have been and what still lies ahead.

Bryant swooped in as the trailer on a tackle in a game already decided. Linebacker Joshua Perry made the initial hit, then rolled over Bryant’s ankle. Bryant was among the team leaders in every way — statistically and vocally — before being sidelined.

“I couldn’t even begin to understand the feelings that he probably has,” teammate and offensive lineman Jack Mewhort said. “It’s going to be emotional for all of us, knowing that he wants to be out there with us and he can’t. We appreciate him, we love him and I know we’ll be thinking about him.”

Five games in, it may have been the end of his season and college career. But Bryant didn’t know it.

“I honestly didn’t know what was wrong,” said the 5-foot-10, 193-pounder out of Cleveland’s Glenville High School. “At first I kind of thought it was a high-ankle sprain or something. But as I was riding back to the locker room, it just started throbbing a lot more and then it kind of went numb. The doctors X-rayed it immediately and one of them told me that my ankle was broken. It was just one of those moments that you really can’t explain how you feel.”

He has spent the time since attending class, rehabbing in the training room and encouraging his teammates. He may not be on the field, but he’s still an integral part of the team.

“He is still the guy that everybody on that defense looks to,” said co-coordinator Everett Withers. “He’s a guy that if something isn’t going good, he’s going to let everybody know that it isn’t going good and why it isn’t good. If it’s going good, he’s going to be a positive role model on that sideline. He has a tremendous role. Our players feel good when he’s there. He provides a lot of, I guess, glue to our football team.”

Team doctors say it’s possible he can play in a bowl game if the rehab goes well.

In the meantime, team officials will check with the NCAA to see if there’s a possibility of Bryant getting a medical redshirt season, giving him a fresh start next season.

Of course, Bryant could also let the ankle heal and build his body back and then hope he can prove to the NFL that he’s back to his old, hard-hitting self in workouts for teams in the spring.

He’ll sit down soon with his parents and his younger brother, relatives, friends and coaches and try to reach a decision on what’s next.

Bryant said this season of victory and pain and personal loss taught him something.

“I would just say I persevered through obstacles,” he said. “You can never think about what’s going to happen next because you have no idea. So you have to live in the moment and just try to seize every opportunity.”

CLEVELAND (AP) — The Browns and the city of Cleveland reached a tentative agreement to fund a two-year, $120 million... read more