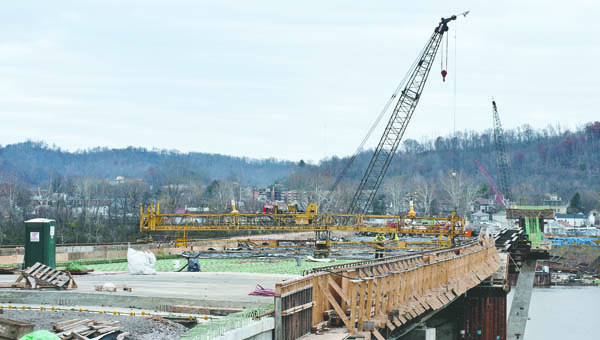 View of the construction of the future Ironton Russell Bridge seen from the Kentucky side.

Progress on the Ironton-Russell Bridge continues to be made but as winter weather begins to set in, work on the bridge could slow down.

“Obviously we are kind of at the mercy of Mother Nature,” said Kathleen Fuller, public information officer for District 9 of the Ohio Department of Transportation. “Some of the work just can’t be done in inclement weather conditions.”

Even if bad weather hits, the construction crew has already made strides toward the completion of the bridge, Fuller says. Brayman Construction Corporation from Saxonburg, Pa., has the contract to put up the structure.

“We are probably a third of the way in,” Fuller said. “Most of the substructure is already complete. The back span is about 80 percent finished, and right now we are working on forming the third deck of the bridge.”

Right now Fuller couldn’t say if the project was on schedule but did say she believes construction is coming along.

“We may be a little behind if anything,” Fuller said. “But I can’t really say. As we get into the next year I would have a better idea of a time frame. I can say that so far I think everything has been coming together great.”

If the weather holds up, the crew’s next step will be to start construction on the span of the roadway portion of the bridge.

“That’s the next step, completing that span,” Fuller said. “But let’s hope for a nice warm winter so things can keep progressing at a good pace.”

Cameron Deere from Dawson-Bryant Elementary may or may not get his pet named Lawrence County’s “Top Dog.” But he knows... read more