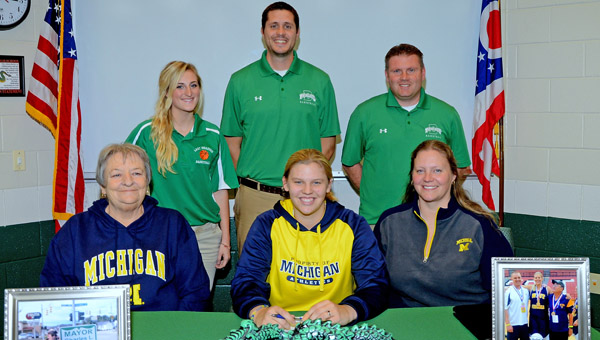 Wednesday, they found each other.

Stapleton — the Fairland Lady Dragons 6-foot-4 senior center — signed a national letter-of-intent with Michigan on the final day of the early signing period and filled the wants for both her and the Wolverines.

“I love their education program there,” Stapleton said of Michigan. “They have 100 percent graduation rate among their women’s basketball players. They have the No. 1 academic program in the Big Ten.

“I just love the coaching staff and I love the way they play. I just wanted to be closer to home.”

Stapleton is the fifth early signee for the Wolverines since the signing period began last week.

Barnes Arico said the 6-foot-4 Stapleton was just what her team needed.

“We are excited to add a player like Terra to our already great class,” said Barnes Arico on the school website. “The one thing we were missing in this group was some size, and Terra will bring that to our team.

“She will be able to give us a presence on the low block both offensively and defensively while also helping us on the glass. She will be a wonderful addition to our team.”

After she de-committed, Stapleton got a call within an hour from Michigan and set up a visit to see the university and watch the team play. The coaches told her she would play immediately.

“They said ‘we hope you are a fast learner. You’ll be playing and learning,’” said Stapleton. “They don’t have a true center. They have (Cyesha Goree) who is really a four. She’s so talented. She can do so much more by playing a four.”

In the past two seasons, Stapleton has averaged 18.1 points, 11.9 rebounds and 4.5 blocked shots per games. She is a two-time Division III All-Southeast District first team selection, two-time first team All-Ohio, two-time district Player of the Year, and last year she shared the state Player of the Year award with Hannah Plybon of Orrville and Marley Hill of Columbus Africentric.

“Terra has the size to play at the next level, but she also has the ability to play. She’s been a great player for us but I think she’ll be an even better at the college level,” said Fairland coach Jon Buchanan.

The Lady Dragons have posted back-to-back 20-0 regular seasons and reached the regionals the past two years on the strength of Stapleton’s play. She said signing with Michigan relieves the pressure.

“I can enjoy my senior year now,” said Stapleton. “I just want to help my team. I don’t call it a team. I call it my family. We all help each other. If one person is in trouble, we’re all in trouble.”

Stapleton is the daughter of Cathy and Charles Stapleton.

COLUMBUS (AP) — Amir Williams and Shannon Scott were McDonald’s All-Americans in high school. For most of their Ohio State... read more