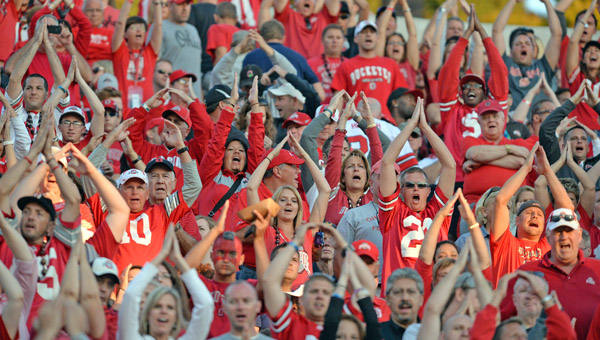 Ohio State Buckeyes’ football fans cheer for their team during the games, but they express frustration afterwards with the BCS playoff system that may leave their team out of the championship game. (MCT Direct Photos)

COLUMBUS (AP) — As he strolled to the locker room on Wednesday night after Ohio State’s chilly outdoor practice, Urban Meyer reflected on the speculation going on outside the team offices among Buckeyes fans about the BCS, bowl games and rankings.

“Fans get to have some fun,” the second-year Ohio State coach said. “That’s what makes college football so neat right now.”

Buckeyes fans could not disagree more.

This is not fun.

They’re riddled with angst and anguish these days because their favorite team is stuck in third place in the BCS, Baylor is charging fast from behind and there seems to be no good alternative to another bowl season of thinking what might have been.

Callers to sports-talk radio and those clicking on Ohio State booster websites can’t figure out what the Buckeyes have done wrong.

Ever since Meyer took over, they’ve won every game — 22 in a row, the longest streak in the nation. And still it doesn’t look as if the Buckeyes can elbow their way into the BCS title game ahead of top-ranked defending champion Alabama or No. 2 Florida State.

The fans’ emotions are jumbled.

Some are angry, most are frustrated.

But it’s not as if they’re marching through the streets of this white-collar city carrying pitch forks and torches.

A year after NCAA sanctions prevented the Buckeyes from putting their unbeaten team on display in a major bowl game, almost all of the Ohio State faithful have grown comfortable with their team being left behind — again — in the race for the national championship.

“Most people I’ve talked with have kind of resigned themselves to (the fact) it’s not in this team’s hands and that’s the stark reality they have to face,” said WBNS radio’s Paul Keels, the play-by-play voice of the Buckeyes and host of Meyer’s weekly coaches call-in show. “What they can cling to is the hope that this team goes unbeaten, wins the Big Ten championship, and if they can’t go to the BCS championship game, well, then you still have something else to brag about.

“It just seems as though there’s been somewhat of a reluctant acceptance to the way the whole situation sits right now.”

Heading into Saturday’s final home game against Indiana, the Buckeyes (10-0, 6-0 Big Ten) have few chances to wow the BCS poll voters and computers. The final regular-season game is at The Big House against a Michigan (7-3, 3-3) team that has played poorly in recent weeks.

Should the Buckeyes win those two games, they’ll most likely meet 13th-ranked Michigan State in the Big Ten championship game on Dec. 7 in Indianapolis.

The final BCS rankings come out the next day. Ohio State fans already have an ominous feeling how it’ll all end. If things turn out right, a trip to the Rose Bowl. But the Buckeyes would be playing there a few days before the national title is settled and the crystal football trophy is handed out.

It’s come to this in present day college football: A berth in the Granddaddy of all Bowls is seen as a bitter pill to have to swallow.

Ohio State’s star quarterback Braxton Miller was asked if he had any advice for the team’s most ardent fans — the ones who buy only gray cars with a scarlet interior, or who name their kids Urban.

“Man, I have no idea. Because it’s not in our hands,” he said, smiling.

He said about all anyone following the Buckeyes can hope for is that the team wins by a landslide in each of its games.

“Just make it look easy,” he said. “Maybe (the voters) will switch it up in the future. We hope for the best.”

It’s not just the top two teams that worry Ohio State fans. Unbeaten Baylor has climbed into the No. 4 spot in the BCS rankings, right behind the Buckeyes. In the system’s migraine-inducing mathematics, the Buckeyes are 1.045 points behind Alabama and .792 points behind Florida State — but only .0013 ahead of Baylor.

“I can tell you that this week, with Baylor on their heels, there’s a little more anxiousness (for fans),” said Matt McCoy, sports director at Columbus radio station WTVN, where he hosts Ohio State-centric shows. “I got an email from a guy who said, ‘Can you imagine if Ohio State gets passed over for the title game for Baylor?’ I can’t remember exactly what he said after that, but it was along the lines of, ‘The world is officially ended.”’

There’s also a subset of Ohio State fans who would be perfectly happy if the Buckeyes run the table, miss out on the national title game, but end the season with winning streak — and dignity — intact.

They remember the lopsided losses in the national championship games after the 2006 and 2007 seasons — the former to a Florida team coached by Meyer. Maybe sitting out the title game, and holding on to the possibility that the Buckeyes might have won if invited, is far better than going up against an Alabama team and possibly getting smoked.

After all, the Buckeyes are 0-9 in bowl games against Southeastern Conference teams. One win in the 2011 Sugar Bowl against Arkansas was vacated due to NCAA violations.

“There’s also the folks who say, ‘Hey, at least we’re in the championship game.’ You can think back to 2002, when they went into that title game and were heavy underdogs,” Keels said, referring to a 31-24 double-overtime victory over Miami for the Big Ten’s most recent national title in football. “They at least had the chance.

“But there are people who fall into that ‘be careful of what you wish for’ category, too.”

CINCINNATI (AP) — Linebacker James Harrison didn’t need much time to think about the similarities between himself and Vontaze Burfict,... read more