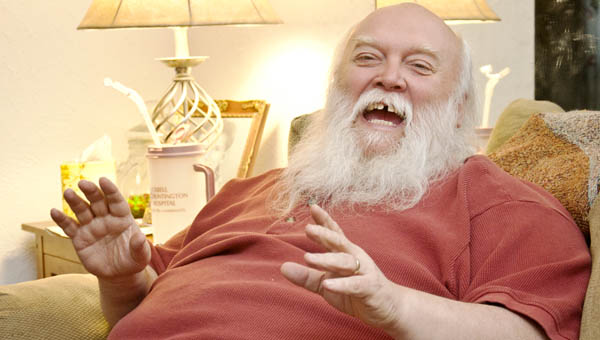 The Tribune/jessica St. James
Robert McCloud is back to playing Santa Claus after rehab at Sunset Nursing facility.

In the NFL December is a month where title contenders jockey for playoff position; it’s also the month that our neighbors hopped up on eggnog engage in decorative battles of Griswaldion proportions.

But this Christmas season Robert McCloud is thankful he is back on the Santa Claus circuit.

McCloud has played Kris Kringle at parades and parties since 1977, suffered a bad fall that required knee surgery and months of rehabilitation in Sunset Nursing facility in Coal Grove.

“I fell and hurt my knee in November,” McCloud said. “I had the surgery, spent some time in the hospital and then went into Sunset on the third of December. I stayed there until March, so it was the first time in over 30 years I didn’t play Santa.”

McCloud, who performs professionally as Santa, says dressing up as Jolly Ole Saint Nick, is much more than a job for him; it’s a family tradition.

“My grandfather was Santa Claus. My dad was too and when he died in 1977 from cancer I took up the mantle,” he said. “I only intended to fill the engagements my dad was already booked for, but somehow I just kept doing it.”

Now, McCloud is set to make a return to Sunset although under much different circumstances as he plans to repay the nursing center for the care they provided him the four months he spent there.

“I told them last year that they wouldn’t need to pay someone to come and be Santa in 2013,” McCloud said. “They took amazing care of me, everyone there really did their best to meet my needs and get me better. So now I’m paying it forward and I’ll play Santa there for free.”

This won’t be the first time McCloud has played Father Christmas for free; throughout the decades numerous occasions have popped up where he just couldn’t bring himself to charge.

“I’ll be the first to tell you I do this for a profit most of the time,” he said. “But sometimes, making a kid’s Christmas is more important. Like this year there is a boy with brain cancer, he’s only six. This may be his last Christmas, I’ll be visiting his house for free.”

Crediting the care he received at Sunset for his ability to resume his role as Santa Claus, McCloud has a full schedule of appearances lined up beginning with the Thanksgiving parade in Burlington.

“I owe a lot to the people at Sunset,” McCloud said. “I’ve never seen a place take such great care of their patients. I made some great friends there and it was a blessing to find the place.”

Santa is set to visit Sunset on December 23 and will be accompanied by Mrs. Claus and perhaps a surprise guest from the North Pole as well.

“I promised them if I was walking I’d be back,” McCloud said. “Well I’m walking, and that’s a credit to them. So I’m thankful that I won’t be breaking this promise.”

An argument for giving thanks

In 1863, President Abraham Lincoln called a nation divided by war to join together in a time of corporate thanksgiving... read more