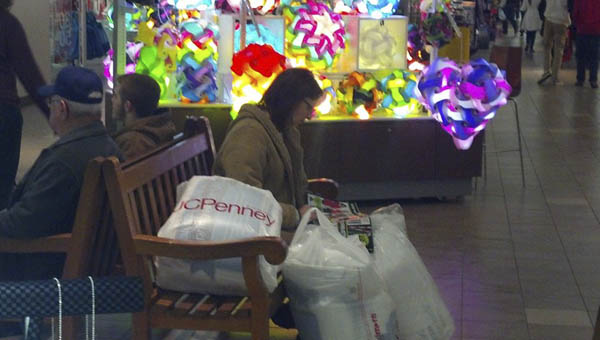 A Black Friday shopper rest on a bench inside the Ashland Town Center Mall. Photo by: The Tribune/Justin Prince

The day after Thanksgiving is one of America’s biggest shopping days, known nationally as Black Friday, when stores slash prices to bring in the holiday bargain shopper.

This year stores opened their doors earlier than usual as Black Friday got started while the calendar still read Thursday. The early start didn’t serve as a deterrent for shoppers as lines outside the Ashland Town Center began forming just after 7 p.m.

“It’s kind of crazy how early stores opened this year,” Kristen Bellomy, from Louisa, Ky. said. “I said I wouldn’t do this on Thanksgiving but here I am.”

While the crowds for the sales day were good, the reviews were mixed on the actual deals stores were offering.

“The deals didn’t seem as big this year,” Bellomy said. “In some stores it was hard to tell if they had any special offers or just their typical markdowns.”

Aaron Fletcher a deal hunter from Huntington, W.Va. didn’t disagree with Bellomy but added that it’s about what kind of items you’re looking for more than where you’re looking.

“I’ve learned it’s all about what you’re looking for,” Fletcher said. “If you’re shopping for clothes or toys you aren’t getting a discount you couldn’t get next week. But on things like electronics, that’s where you can find the deal. Those are the items stores mark down.”

Many Americans don’t participate in Black Friday deeming the sometimes hostile crowds too much of a hassle to combat in the name of saving a few dollars. While others look at the night as an adventure, one where they can show off their skills for spotting deals.

“For me the crowd and the craziness is half the fun,” Fletcher said. “It’s like a competition. Its about who can get the better bargain. When you know you got a good deal, you feel like a winner.”

Putting the giving in Thanksgiving

For three years Vicki Roach and other volunteers from the Upper Township community have helped provide Thanksgiving meals for those... read more