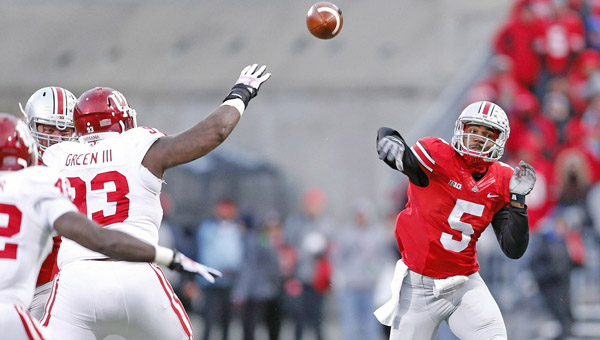 “I certainly get asked that question: Can Braxton Miller be an NFL quarterback?” he said. “Absolutely, he can. No doubt in my mind because he continues to develop.”

Just not right away.

“He has a skill set to be a pro quarterback,” Meyer said this week during preparations for the third-ranked Buckeyes’ major showdown at rival Michigan on Saturday. “I don’t believe he’s ready yet.”

Of course, no one could blame Meyer for being protective of his junior signal-caller. He knows how far Miller has come, but he also believes — granted, it’s also self-serving — that Miller would benefit from another year in Ohio State’s spread system.

Even Miller is amazed by where he was two years ago, a freshman tossed into the mix when three-year starter Terrelle Pryor abruptly jumped to the NFL in the summer and in the middle of an NCAA investigation.

“I was thrown in there early,” Miller said. “I don’t think I was ready at that time. But I did what I had to do. It was kind of a big stage at the time. It was kind of tough because I was so young and I really didn’t expect to play as a freshman.”

Now that he has three years as a starter under his belt, he’s adding things on an almost weekly or daily basis to his repertoire.

He used to be a runner who lined up at quarterback; now he’s a quarterback who can run.

Part of the reason he’s improved, in addition to cataloguing all of the experiences of 33 games and hundreds of practices, is that Miller has learned to let go. Instead of over-analyzing each play, each call, each read, he appears to be enjoying himself more on the field.

“You can tell with Braxton, he had a smile on his face every time he made a play,” said wide receiver Devin Smith after a recent game. “You could tell he enjoys playing the game.”

The 6-foot-2, 215-pounder from suburban Dayton, Ohio, is completing 68 percent of his passes for 181 yards a game and has totaled 19 touchdowns against just four interceptions. He has also discovered when and where to run, following up a 2012 season in which he ran for a school-record 1,271 yards and 13 touchdowns by running for 738 yards and five scores.

It’s clear that, because of his maturation, the offense is vastly improved. The Buckeyes are averaging 49 points (third in all of major-college football) and 531 yards per game (seventh in the nation).

“It’s growing up, being more mature, handling the things that come in front of you,” he said of his education at the position. “Coach Meyer came in, told me a lot of things. (Offensive coordinator Tom) Herman worked with me on fundamentals and learning how to read defenses and being a leader on the offense.”

Two years ago, Miller overthrew a wide-open DeVier Posey for what would have been a game-winning, 76-yard touchdown in the final minute against Michigan. Ohio State lost at The Big House, 40-34.

The Wolverines know they are facing a different player this time.

Miller has thrown 606 passes in his college career but it wasn’t until his 598th attempt that Meyer realized just how far his quarterback had come.

He stood tall in the face of a stiff rush to complete a 34-yard pass to tight end Jeff Heuerman last Saturday, setting up a touchdown late in the half of what would become a rather mundane 42-14 win over Indiana.

Until then, Miller had never shown Meyer that he was willing to stare down an onrushing defender to hit a receiver.

“That was the best play I think he’s had as a quarterback,” Meyer said. “That was his moment.”

On a crisp Saturday in Ann Arbor, Mich., he’ll be asked to take another big step forward.

Ohio State needs to stay unbeaten to have a shot at playing in the BCS national championship game. Michigan is playing for pride and postseason positioning.

The Wolverines will likely have to figure out a way to block standout LB Ryan Shazier to have any success on offense. And if that happens, it would be surprising. Michigan has struggled to protect Devin Gardner in the passing game and to open up holes in the running game. Shazier is one of the best linebackers in college football. The Butkus Award finalist leads the Big Ten with 108 tackles, 19.5 for losses and four forced fumbles.

Ohio State: RB Carlos Hyde has run for 1,064 yards and 13 touchdowns in eight games. The senior has 100-plus yards rushing in six straight games.

Michigan: Gardner will have to make plays with his arm and feet to keep it competitive. He has been spectacular at times, scoring five touchdowns in two games and accounting for 503 yards of offense once this season. Gardner, though, had a key fumble late in last week’s loss at Iowa and has thrown at least two interceptions in four games.

Ohio State has won a school-record 23 straight games since losing to Florida in the Gator Bowl on Jan. 2, 2012, and at Michigan to close the 2011 regular season. … Since the Wolverines won their last Big Ten title in 2003, they have lost eight of nine games against the Buckeyes. … Ohio State is averaging a Big Ten-best 48.7 points per game, ranking third in the nation. … Devin Funchess has 686 yards receiving, a single-season record for a Michigan tight end. … Ohio State will meet Michigan State for the Big Ten title next week in Indianapolis. … Michigan is hoping for its biggest upset in the rivalry since it was a 17-point underdog and beat Ohio State 13-9 at home in 1996.