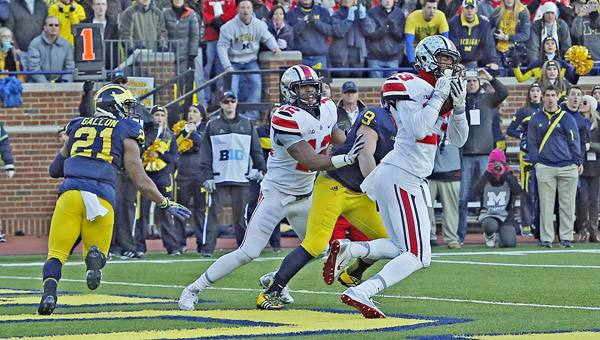 ANN ARBOR, Mich. — The 110th game between Ohio State and Michigan might have been the most thrilling, a back-and-forth affair that came down to one final play.

The Wolverines went for the win — and the Buckeyes stayed undefeated.

Tyvis Powell intercepted Devin Gardner’s 2-point conversion pass with 32 seconds left and No. 3 Ohio State held on for a 42-41 victory against Michigan on Saturday as one of the greatest rivalries in sports added another memorable chapter to its storied history.

Gardner threw a 2-yard touchdown pass to Devin Funchess to make it 42-41, but instead of kicking for the tie and possibly pushing the game to overtime, Wolverines coach Brady Hoke asked his players if they wanted to go for it and got a unanimous response.

“We played the game to win,” Hoke said.

Gardner tried to zip a pass to Drew Dileo into traffic near the goal line, but Powell came up with it and the quarterback was left lying on his back with his arms extended to his side, the back of his helmet resting on the cold turf.

“We felt like we could win the game right there,” Gardner said, looking and sounding as saddened as any athlete after a setback.

Meyer insisted the streak was not as significant as winning his second game in as many tries against Michigan.

“No question — the win over our rival is better,” he said.

Quarterback Braxton Miller accounted for a career-high matching five touchdowns for Ohio State (12-0, 8-0) and Carlos Hyde ran for a 1-yard score with 2:20 left to make it 42-35.

The Buckeyes will play Michigan State in the Big Ten title game next Saturday in Indianapolis, needing to beat the Spartans, and have No. 1 Alabama or No. 2 Florida State lose a game to have a chance to reach the BCS national championship game.

The Wolverines (7-5, 3-5) started strong as a 16 1-2-point underdog and didn’t wilt when Ohio State went up 35-21 late in the third quarter, one drive after Gardner threw an incomplete pass on fourth-and-2 when Hoke opted against attempting a 31-yard field goal.

“They didn’t let up at all,” Miller said.

Michigan, though, couldn’t make a pivotal play in a shootout that might’ve given it the biggest upset in the series since Bo Schembechler’s first team at Michigan beat what Woody Hayes said was his best Buckeyes squad in 1969.

“I threw an interception that cost us the win,” said Gardner, who limped into a news conference with a protective boot on his left foot. “That’s what I will remember.”

Miller ran for 153 yards and three TDs and threw for 133 yards and two scores. Hyde ran for 226 yards to help Ohio State win for the ninth time in 10 games against Michigan, but he fumbled in the fourth quarter to help Michigan tie the game for a fourth time with 5:01 left.

Both teams scored at least 41 points for the first time in their rivalry that dates to 1897.

Gardner was 32 of 45 for 451 yards and four TDs, connecting nine times for 175 yards and a score to Jeremy Gallon, and ran for a 1-yard TD that gave Michigan the first lead in the high-scoring game that went to halftime tied at 21. Gardner fumbled in the third quarter and Ohio State took advantage of the turnover on the ensuing drive with a Miller’s go-ahead, 3-yard TD.

It was a slug fest — literally for a few moments.

The teams exchanged pushes and some punches in the second quarter after a Michigan kickoff.

The Buckeyes lost starting right guard Marcus Hall and kick returner Dontre Wilson and the Wolverines lost backup linebacker Royce Jenkins-Stone to ejections. All three players were flagged for unsportsmanlike conduct and had to leave the field after a skirmish. Hall and Wilson appeared to throw punches. Jenkins-Stone tugged Wilson’s helmet off and tossed it to the turf.

“It was unacceptable,” Meyer said.

While walking off the field and toward the tunnel, Hall put both arms into the air and flashed a familiar obscene gesture, extended middle fingers, to the Michigan crowd.

Punishment could potentially linger for Ohio State if both players are suspended for next week’s Big Ten championship game.

“The conference office will wait until after the game for the officials’ written report, review the video and then take further action if needed,” Big Ten spokesman Scott Chipman wrote in an email to The Associated Press.

Jim Walker jim.walker@irontontribune.com   PEDRO — There’s something about the third quarter that the Ironton Lady Fighting Tigers must like.... read more