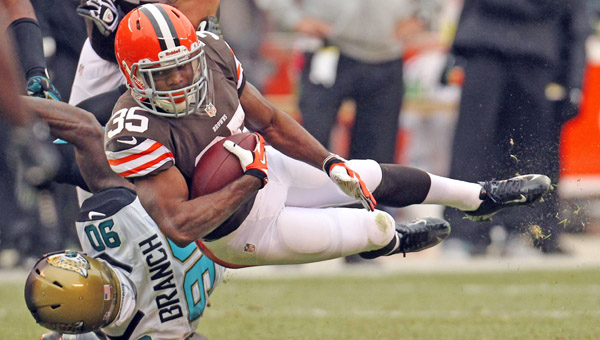 Cleveland running back Fozzy Whittaker, right, is upended by Jacksonville defensive end Andre Branch after a short gain at FirstEnergy Stadium on Sunday in Cleveland. The Jaguars defeated the Browns, 32-28. (MCT Direct Photo)

SAN DIEGO (AP) — With a blue-collar, workmanlike approach, the Cincinnati Bengals knocked the San Diego Chargers back to reality while protecting their two-game lead in the AFC North.

The Bengals ran for 164 yards. They held Philip Rivers to just 252 yards passing. They forced three turnovers and preyed on a big breakdown in coverage.

“Down and dirty,” cornerback Adam Jones said after the Bengals beat the Chargers 17-10 on Sunday, holding San Diego’s high-powered offense to a season-low in points and wearing down its defense.

Andy Dalton threw a go-ahead, 21-yard touchdown pass to wide-open A.J. Green late in the third quarter that allowed the Bengals (8-4), who were coming off their bye, to keep a two-game lead over Baltimore.

“That’s the main thing. We’re not playing just to make the playoffs,” Jones said. “We’re playing for the bye. We played hard and physical on defense. If we keep playing hard and smart and we’re going to be a real, real good team.”

San Diego (5-7) lost the momentum it gained with a thrilling 41-38 comeback win at Kansas City a week earlier. The Chargers’ slim playoff hopes dwindled after their fourth loss in five games.

“You score 10 points, you are going to lose most of the time,” said Rivers, who completed 23 of 37 passes for 252 yards. “That’s a good defense. We just weren’t consistent enough.”

With the score tied at 7, the Bengals got the ball after Dre Kirkpatrick ripped the ball away from tight end Antonio Gates after a reception at the Cincinnati 25, the Chargers’ third turnover.

Ten plays later, Green split the defense for an easy touchdown, with safety Eric Weddle and cornerback Marcus Gilchrist only able to watch.

“Obviously they jacked the coverage up a little bit and missed assignments in the middle and it worked out well for us,” said Dalton, who added that the Bengals’ power running game helped set up that play.

Dalton joined Peyton Manning as the only quarterbacks to start their careers with three straight 3,000-yard seasons. Dalton was 14 of 23 for 190 yards, giving him 3,144 for the season.

“It was just a seam right up the middle, man,” said Green, who wasn’t slowed by a hip pointer sustained during the Bengals’ first drive. “I guess the two linebackers and the safety went with Jermaine (Gresham) and I just came wide open.”

On the Bengals’ next drive, Andrew Hawkins caught a short pass from Dalton on third-and-2 from the Bengals 18 and raced 50 yards to the San Diego 32, where he was pushed out of bounds. The Bengals settled for Mike Nugent’s 46-yard field goal for a 17-7 lead.

The Bengals appeared to be driving for a score that would have put away the game, but BenJarvus Green-Ellis fumbled when he was hit by Gilchrist.

A personal foul against Johnnie Troutman after the field goal forced the Chargers to kick off from their 20 and Brandon Tate returned it 24 yards to the Bengals 34 and Cincinnati ran out the clock.

San Diego held the Bengals to 104 yards in the first half and then gave up 250 in the second half.

Cincinnati’s offensive line manhandled the Chargers on the Bengals’ second drive, which ended with BenJarvus Green-Ellis scoring on a 4-yard run.

The Chargers responded with a long drive capped when second-year tight end Ladarius Green split linebackers Rey Maualuga and Vontaze Burfict and was wide open for a 30-yard touchdown reception to tie the game at 7.

Mostly, though, the Chargers struggled.

“We crossed the 50 I don’t know how many times but we didn’t finish drives,” Rivers said. “It is just not the turnovers; those we know. But there are other drives where we just didn’t finish and ended up punting there right around midfield and that is critical.

“This is a good team,” Rivers said. “Let an opportunity pass us by? Yes. It wasn’t like we had it in our grasp and they came in here and stole it from us. We knew we were going to have to play well.”

Said Burfict: “Just when they’d get to the 40-yard line, we had to stop them. That’s what we’re good at. They cross the 50 and everybody stepped up to make plays.”

NOTES: Chargers rookie Keenan Allen had eight catches for 106 yards, the fifth 100-yard game for the third-round draft pick from Cal. … Chargers CB Derek Cox was benched in favor of Richard Marshall. Cox had been benched in three of the four previous games. … Bengals LG Clint Boling hurt his right knee late in the first quarter.

Buckeyes No.2 in BCS

NEW YORK (AP) — Florida State and Ohio State are in position to play for the BCS national championship, though... read more