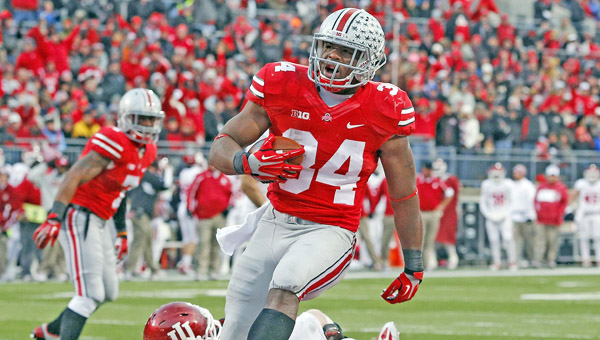 Ohio State Buckeyes’ running back Carlos Hyde scores against Indiana. Hyde is a key weapon in the Buckeyes’ offense as they play for the Big Ten title Saturday. (MCT Direct Photo)

COLUMBUS (AP) — It might seem as if the pressure just keeps building and building on No. 2 Ohio State.

That’s not really the case.

“That’s the beauty about the position we’re in,” center Corey Linsley said. “We really do control our own destiny. We just have to win this game and then it’s all set for us.”

Still, the risks and rewards are elevated — even after the Buckeyes’ biggest win of the season against archrival Michigan. Now they have to turn right around and play yet another major showdown.

They meet No. 10 Michigan State in the Big Ten championship game on Saturday — the latest in a long line of games which have required focusing on the task at hand instead of Big Ten, big bowl and BCS dreams.

In a way, however, as the long season has unfolded, it’s actually easier to concentrate and discard all the extraneous white noise. Roll the dice, play the game, see what happens.

A lot of the pressure went away on Saturday night, after the Buckeyes had pulled out a 42-41 win at Michigan Stadium. The Buckeyes were about 30 minutes north of Columbus when they saw on the TV sets and their smartphones on the team bus that Auburn had shocked top-ranked Alabama on a last-play, 100-plus-yard return of a missed field goal.

That not only pushed the Buckeyes into the coveted No. 2 spot in the BCS rankings behind Florida State, but it also touched off a wild celebration on the bus.

Cell-phone video of the moment when it was all but assured that Ohio State would move up a spot into control of a national championship berth showed screaming, laughing and a lot of back-slapping and high-fiving.

“That was a real exciting moment because a lot of guys were watching the game on the bus,” linebacker Ryan Shazier said. “A lot of guys got hyped from it. That something like this fell into our favor, everything just played out like it should have.”

Now it’s up to the Buckeyes (12-0) to not let this chance slip through their fingers against the Spartans (11-1) at Lucas Oil Stadium in Indianapolis.

“We have done everything we need to do up to this point,” Linsley said. “We can’t start doing things that we haven’t done. We’ve never paid attention to the BCS. Never. That’s never been our primary focus — to jump somebody in the BCS. Our primary focus every week was to win the game by as many points as we needed to win. We can’t start changing stuff up now.”

It would be easy to let up. The Buckeyes survived a last-minute two-point conversion pass that was intercepted by Tyvis Powell to beat Michigan in an instant classic.

Now is when the more experienced players need to show and tell the others how to stay the course.

Coach Urban Meyer, 24-0 on the Buckeyes sideline to extend a school-record winning streak, is convinced that the seniors on the team are strong enough leaders to not permit a letdown or a loss of focus.

After all, in the midst of the cheering on the bus, wide receiver Corey Brown stepped up front, quieted everyone and told them that their work wasn’t finished yet. The mood changed immediately.

“I’m concerned about (the team’s focus) but I trust our leaders.”

Ohio State edged Michigan State 17-16 a year ago in a game that the Buckeyes trailed at halftime but came back to win. It helped set them on course for where they are now — within reach of all of their goals.

They just need to win the next game — the Big Ten’s best offense (Ohio State) against its best defense (Michigan State) — in a make-or-break game for both teams.

Of course, this focus thing works both ways.

The Spartans can leap into the BCS picture, or at the very least assure themselves of a Rose or other top bowl, by upsetting the Buckeyes. It’s not as if they’re satisfied to have merely reached the title game.

“We certainly have come a long way, but right now we’re focusing on beating Ohio State and letting the cards fall,” Michigan State punter Mike Sadler said. “There’s only so much we can control and we just want to beat Ohio State and let the rest take care of itself.”