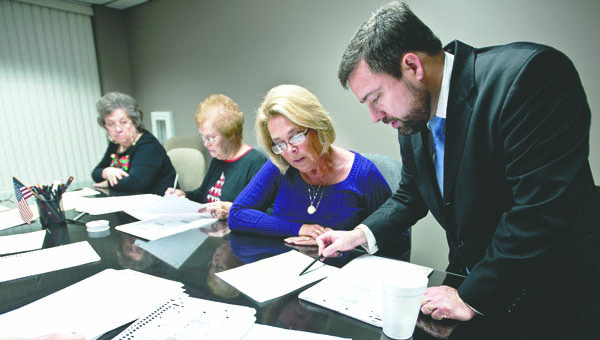 A recount of votes cast those running for Coal Grove Village Council on Wednesday matched the original canvass.

Candidates Shawn McDaniel and Nick McKnight were separated by only three votes after the Nov. 5 general election. State of Ohio guidelines mandate an automatic recount in the instance of such a slim margin.

“It’s a formula used by the state,” Cathy Overbeck, board of elections director, said. “It is determined by how many people are in the race and the total number of votes casts.”

Six candidates were vying for four open seats and Eric Holmes, Randy Wise, Kimberly McKnight and McDaniel were the top vote getters, respectively. Because of the three-vote margin, however, board of elections staff were required to conduct the recount.

Coal Grove precinct A was chosen, at random, for the hand count conducted by a six-member team comprised of three Democrats and three Republicans, and just getting the ballots to the board of elections office is quite a feat.

“Once an election is over, the ballots are placed in a locked bag, sealed and put in a vault,” McCown said. “To open he vault requires two keys, and one Republican has one key and one Democrat has the other. The bags are locked as well.”

As the recount was taking place McDaniel quietly and anxiously awaited the results.

McDaniel mentioned the high number of absentee voters in precinct A, which he felt was to his disadvantage because many votes he received were walk-ins.

“It’s amazing,” he said as he watched the hand count intently. “I didn’t get hardly any absentee votes, but I got a lot of poll votes.”

A total of 2,082 votes were cast in the race for Coal Grove Village Council.

It had all the makings of a big time boxing match. Every seat was full, competitors were ready for toe-to-toe... read more